For those about to block, we salute you

Despite the amount of math and swatching and blocking of swatches I completed before beginning the St. Enda sweater, I began to doubt myself about the size and fit. I'm almost halfway through a sleeve and it just doesn't look right, though I've checked and re-checked the pattern schematics and my gauge. I knew that I was erring on the small size with my knitting and planned to block the sweater to size, but still I worried.

To allay my fears, last week I washed and blocked the back piece. The difference is amazing. The front and back were the same size, but look at them side by side now! 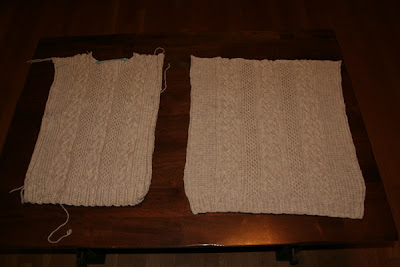 The back looks really fantastic and finished and boyfriend-sized!

It is only recently that I began knitting items on the too-small size, and blocking them larger. It's a great way to control the finished size of your garment. Knitted items tend to grow when washed so you can always block something to a larger size, but you can't make them smaller (not without felting anyhow). Eunny Jang taught me this in response to a question I posed on Craftster a few years ago.

There are different methods of blocking including steam blocking (which is terrifying as it involves an iron near knitted items) and spray blocking, but I use the simple wet blocking method as described in Stitch n Bitch. I wash the garment by hand, roll it up in a towel to remove excess water, then lay it out on my blocking surface and pin it in place. This seems like the most logical way to block because eventually I will have to wash the garment and I don't want there to be any surprises. No doubt that whatever the results of steam or spray blocking, they won't predict how the fabric will behave when it is washed.

As for the surface on which I block, that is another whole subject worthy of an entire post. Suffice it to say that I don't have a professional blocking board but I may end up buying one. Though many say they're not worth it, I haven't found a good substitute yet.

The St. Enda is ahead of schedule right now. My goal is for one sleeve to be done by the end of September but I think it will be done a week from now. Let's see if my prediction comes true!
Posted by 3goodrats at 9:18 PM

I'm actually interested--what kind of surface do you use to block?

Back when I made this sweater, I think I was just laying out towels on the floor and pinning the sweater pieces to it. Which doesn't work very well! But now I have a set of homemade blocking boards made from homosote covered in muslin. They are better, but it's really hard to push pins into the homosote. A professional blocking board is probably not a bad investment if you see more sweaters in your future!