Finally, finally I have pictures. 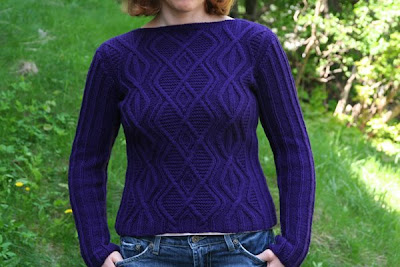 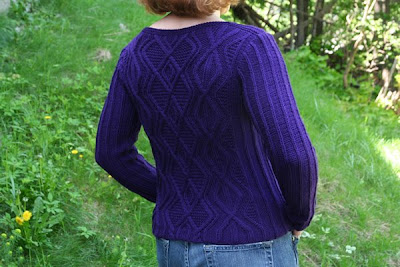 Pattern: Marseilles Pullover by Kathy Zimmerman from Interweave Knits Summer 2006
Yarn: Cascade 220
Needles: Size 7
Modification: The only mod I made was on the neckline, as many others (such as Mind of Winter) said it was too open. So I kept all the stitches live until I was attaching the front and back, and only then did I decide how large to leave the neck opening.

For the most part this sweater came out well. It's a little small, and a bit too short, but I think it will be ok. It feels pretty good (though too warm for May!) The difficulty with planning this project is that the sizes I had to choose from were 34" and 38". I wanted it to be around 36"-37" so it was kind of a guessing game. One cannot block something smaller so my inclination is always to knit on the small side and block larger. I had heard that this sweater grows a lot with blocking and I realize this partly depends on the yarn, but the stitch patterns also affect this. So I went with the 34". The problem is that I probably should have gone up a needle size, but this is what the swatch told me to do. (Swatches, they lie - believe it.) The armhole is a little tight (which seems to be a recurring theme in my life) but it's actually fine if I just wear a little camisole or something under it, rather than a long-sleeved t-shirt.
But hey, it's purple!

The front and back pieces are identical, and took a long time. It's all charted, and you really have to pay attention because usually on the wrong side of something like this you're just knitting the knits and purling the purls, but there is a lot of garter stitch in this pattern. I definitely did some ripping and re-knitting when I began the project, but it became easier as I moved along. The sleeves went very quickly, for which I am grateful.

All in all, I love how it looks, and I'm really glad it's finished!
Posted by 3goodrats at 8:13 PM