I'm sorry for the blog silence last week - things have been a bit crazy here! I have barely done any knitting at all, though I have promised pictures of my new sock project and will post those later this week. In the meantime though, I want to tell you about the book I just read. 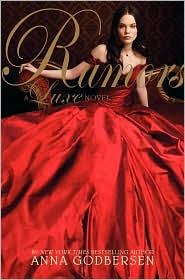 I recently shared my review of The Luxe by Anna Godbersen, in which the story leads up to the funeral of society girl Elizabeth Holland. The second book, Rumors, is focused on Elizabeth's younger sister Diana, and her budding romance which is threatened by Elizabeth's opportunistic friend Penelope Hayes and former Holland household maid Lina Broud.

Without spoiling the plot, I will only say that this book was every bit as good as the first one. The Luxe had left the story in a great spot for the second book to pick up, and it was just as full tasty little turn of the century society tidbits and scandal and fashion as the first one. Again, each chapter began with a snippet from an etiquette manual or newspaper column. The thwarted romances were just as heartbreaking, the backstabbing just as shocking. The third book in the series is on its way to me now, and I hear there's a fourth coming out in the fall. That will be hard to wait for!
Posted by 3goodrats at 9:23 AM