Last Night at the Lobster: a review 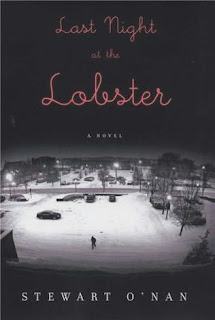 What a great little book! I was just introduced to Stewart O'Nan recently with The Good Wife, and now he's two for two. Last Night at the Lobster takes place at a Red Lobster restaurant in Connecticut, on the last day that they are open before being shut down permanently. Because of the imminent closing, many staff don't bother to show up, and to top it off there's a snowstorm. But the manager, Manny, persists in keeping the restaurant open, determined to make the most of his last day.

The simplicity of this novel appealed to me, as did Manny's sense of responsibility and attention to detail. I loved the descriptions of all the little tasks he performed around the restaurant, from clearing snow from the walkway to clearing tables for the waitresses and appeasing customers. His work ethic is far beyond that of many people I've known and worked with, and was really admirable.

The flip side was the disorganization of his personal life, which he mused over throughout the novel. His girlfriend Deena was pregnant, but he still longed to be back with Jacquie, a Red Lobster waitress. But that was not to be, and his dissatisfaction with Deena did nothing to help him move past it. One gets the sense that conscientiousness he displays on the job is compensation for the lack of direction and responsibility in his personal life.

At 146 pages, the pay off of this novel far exceeds the time investment. If you haven't read anything by Stewart O'Nan, this is a great place to start.
Posted by 3goodrats at 11:56 AM

I read this earlier in the year and loved it, too; brought back vivid memories of the horrible teenage summer I spent bussing tables at a chain restaurant.