I have come to the heel in my first Chevron Sock, and was surprised (because I had not read the whole pattern ahead of time) to find in the instructions something called the Forethought Heel. Disappointed not to be knitting a heel-flap and gusset, I had to remind myself that I have been itching to try all these different heel types I keep hearing about (Eye of Partridge sounds particularly enticing!) and forged onward.

My first surprise was learning what an Afterthought Heel is. I don't know what I thought it was, but apparently you knit the sock as a tube and then - the horror! - CUT the yarn and add a heel. What silliness! I don't know about you, but I do not spend time making all those little stitches only to cut them and rip them out. I like to plan ahead and just make the heel when I get to the part where the heel will go. The Forethought Heel is apparently Charlene Schurch's way of getting a heel that ends up looking the same without the equivalent level of pain.

To make a Forethought Heel, you set aside your instep stitches as normal and then cast on the same number provisional stitches, which you join with the remaining heel stitches. Then you knit in the round, decreasing every other row. Or, if you're like me, you decrease in every row until you are almost done, realize your mistake, then rip it out and begin again.

Here is an out-of-focus shot of what it looks like near the end. 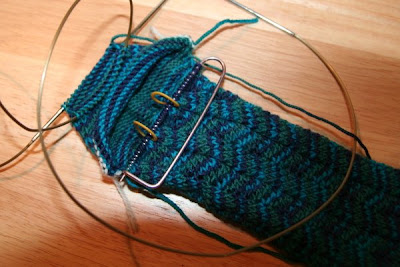 The yellow stitch markers are on the unused instep stitches and the curling part above that is my provisional cast-on (together they will be joined to continue along the foot towards the toe). The narrow part at the top is the heel, just a few rows from being finished.

Once you have decreased sufficiently, you graft the last stitches together using kitchener stitch, as you would for a toe. This would be a deal-breaker for many people but I am pro-kitchener stitch as it has magical properties which create an invisible seam when you are done.

Now, all of this is done with yarn pulled from the opposite end of the skein as you were using previously. You are supposed to pick the part that matches the point of stripiness where you left off before beginning the heel. I still don't exactly understand this, but it is supposed to create a bulls-eye sort of pattern on the heel. 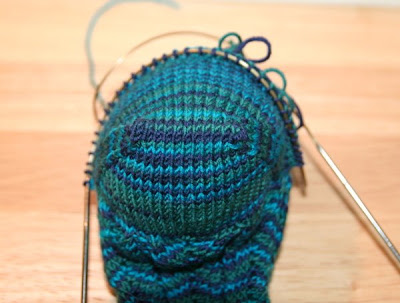 Not exactly, but it's still a nice enough heel. I don't know if it's nice enough to justify how annoying and time-consuming it was to make though. I will only know once the socks are finished and on my feet.
Posted by 3goodrats at 10:29 AM