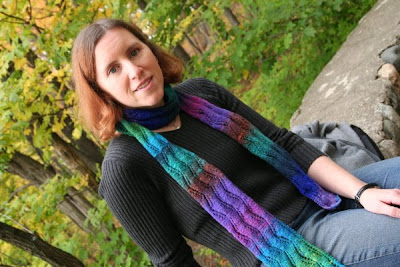 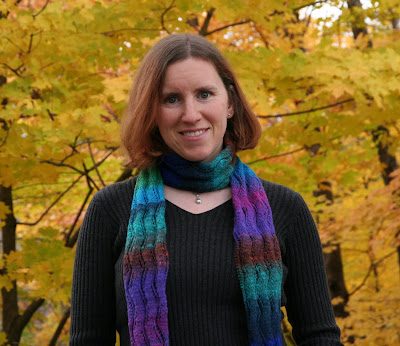 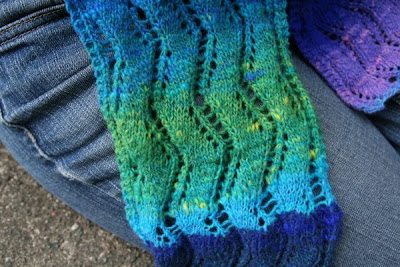 Lace Ribbon Scarf from Knitty.com in Noro Sock Yarn. I did one less repeat of the lace pattern than called for as I don't really like wide scarves. It curled a lot even with blocking, which is ok as it will be wrapped around my neck. (I do wish I had a decent blocking board, though, but I think that's a subject for another post.) This scarf felt like it took forever. I started it in May and then entered it in the Ravelympics WIP Wrestling and still didn't get it done. But once I was free of St. Enda it practically finished itself.

Although I like the Noro Sock Yarn, I wouldn't use it for socks. It's very thick and thin, and there was actually one bit that was so thin I didn't use it. The rest is fine for a scarf, but for something like socks that will rub up against shoes and be walked on and stretched out around a foot, I wouldn't recommend it. I think I found 3 knots in the skein which is annoying enough as it's hard to weave in ends in lace, but to make matters worse, where there's a knot the color changes quite abruptly. (Look at the third pic for an example of this). That being said, I love the colors and very much enjoyed working with the yarn.

I finished this a week ago, but the weather has not cooperated with me enough to get pictures until now. These were taken at Fresh Pond in Cambridge yesterday. It was the perfect day for a brisk fall walk, because not only were the leaves beautiful but the squirrels were busying themselves preparing for winter so they were both extremely active and adorably plumptious.
Posted by 3goodrats at 1:44 PM

Hey, you have posted some very beautiful and inspiring designs. Way to go, lady !