Here are my final book reviews for 2008. 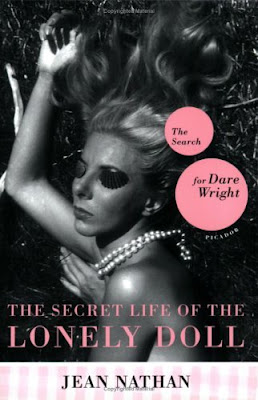 The Secret Life of the Lonely Doll: the search for Dare Wright by Jean Nathan

Several years ago I found a copy of The Lonely Doll by Dare Wright at the library where I worked and became fascinated by the creepiness of the supposed children's book. I had heard that the author had an interesting, if not disturbing, life and now I've finally read this fantastic biography by Jean Nathan.

Dare Wright was a model turned photographer who was inspired by her doll Edith to make a book documenting the adventures of the doll and her teddy bear friends, which soon grew into an entire series. The books are a little eerie and strange (do a google image search on "lonely doll" for a taste), but it's no surprise when taken in the context of her life. She had an unusually close relationship with her mother (and that is putting it diplomatically), who divorced Dare's father when the kids were young. Dare and her brother were split up for many years, only meeting again as adults. These were the primary relationships in Dare's life; she never married or even carried out a mature romantic relationship with any man and those around her speculated that she was uninterested or unable to have such a relationship. (It really begs the question if she was a closeted lesbian, but we'll never know.) At any rate, her life was rather solitary and ultimately, pretty sad.

Since she didn't keep a journal, the story was pieced together through letters and photos. Given how little she had to go on, Nathan did a great job of pulling together a comprehensive overview of Wright's life. Wright was such a complicated and unusual person that even after reading the book I'm still left wondering who exactly this strange and interesting person is, what her motivations were, and how she felt about her life and the people in it. Unfortunately they are questions that only she could answer, and she's no longer alive. Many parts of her life will remain a mystery, which I suspect is what she wanted. A Winter Marriage by Kerry Hardie

Hannie Bennet's career is marriage. In her 50s and recently widowed, she arrives in Ireland seeking a husband. At a wedding she meets Ned, an aging writer, and they enter a marriage of convenience; she needs financial stability, and he seeks a woman's presence around his farm. Hannie finds it difficult to adjust to life in the small village and pushes away attempts at friendship. Her troubled teenage son arrives and is promptly sent away to boarding school, but he returns to cause trouble that ultimately reveal dark secrets in his, and Hannie's, past.

This is a very quiet novel with little action through most of it, not even much dialogue in parts, but lots of internal struggles and complex characters. It all moves along rather slowly, building towards an explosive situation that kept me riveted for the rest of the book.

It was no surprise to learn that Hardie is a poet, with her rich descriptions and clever metaphors. For instance, she aptly describes the week between Christmas and New Year's as a "dark, dank time stretched and sagging like an old rope." The novel is filled with such thoughtful descriptions, and her writing is even and consistent. The reviews of this book were disappointing and didn't do it justice. Kerry Hardie is a writer worth reading and A Winter Marriage is a hearty, satisfying novel.
Posted by 3goodrats at 9:19 AM