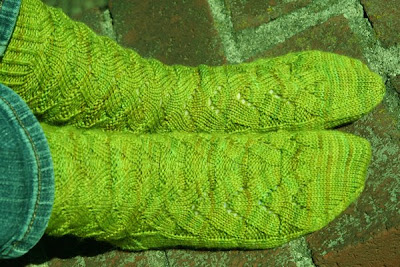 I'm rather ashamed at how long these socks took me to knit. According to my Ravelry info, I began them on February 11th and finished on April 8th. This is shameful because Monkey is SUCH a quick pattern to knit and the Smooshy sock yarn is so nice to work with. There is just no excuse. (But there is a reason, which is that I've been spending lots of time on the Marseilles Pullover. More about that later!)

This is my second, and far superior, pair of Monkeys. The first were made with Tofutsies yarn in a shade I believe is called Circus Vomit Nightmare. (I like Tofutsies yarn; it just wasn't a good color choice, especially for this pattern.) I wish I had used size 0 needles. The socks fit fine, but I do prefer a bit more snugness. All in all, I love them!
Posted by 3goodrats at 10:36 AM

They are so springy and fun! Yay!