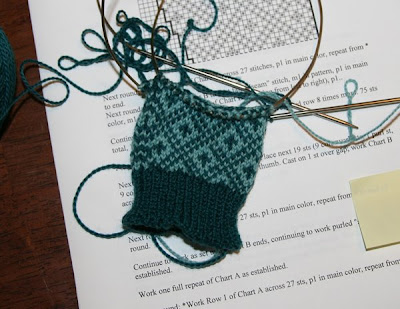 This is a preview because that is my practice mitt - it's essentially my gauge swatch and also fair isle practice. The only fair isle I've ever done is my Fairly Easy Fair Isle from Stitch n' Bitch. It was pre-blog, but if you're on Ravelry you can see it here. There wasn't a lot of fair isle on it, and it didn't come out especially well. It was my first time, and I think the fact that it was bulky yarn was also a factor.

But the mitt looked pretty great, didn't it? I was starting to feel pretty comfortable with the colorwork and it looked nice and crisp and clear. But it was too small, and the cast-on edge was definitely too tight. Per the instructions, I cast on with a size 0 needle and used that for the ribbing before switching to a size 2. This pattern gives you a choice of 3 different sizes, but just uses gauge to vary the size of the mitt. I needed to move up to a size 3 needle, but I didn't have a circular in that size, so I used DPNs instead. 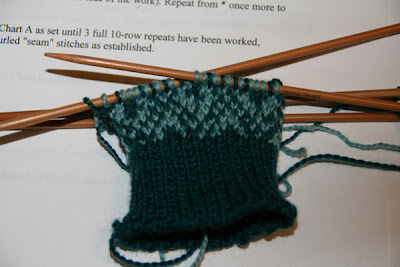 Not a great idea, apparently. Look at how muddled the pattern looks. If I look at it closely, it's obvious that the stitches aren't uniform at all and they look like they are all being pulled in different directions. Which makes sense, as knitting with these stupid things is one big miserable tug of war. Plus I can't hold my hands the regular way because the porcupine-like mess of needles dictates where I can put my hands. And I had to keep ripping back because I was watching a movie and not paying attention to what I was doing.

So today, I sucked it up and bought myself a set of Addi Turbos in size 3. I can't believe I've spent the better part of two days on this project and haven't actually started it for real yet. Good thing I don't have a job - this could have taken weeks!
Posted by 3goodrats at 3:34 PM