My Lucy In the Sky cardigan is SO close to completion, but I've run into some confusion near the end.

I worked the raglan and neckline decreases as indicated until there were 9 stitches left before the first marker. There were a total of 4 markers. The next part of the pattern reads: "Discontinue raglan decreases at first and last marker, and work neck decreases ONLY four times or until raglan is the appropriate length." This would just not compute. Work neck decreases only? That would mean I should also discontinue decreases at the 2nd and 3rd markers. Perhaps it means neck decreases should be worked four times ONLY, but then why say "or until raglan is the appropriate length"? I checked Ravelry and Craftster and I googled and in the end I stopped all raglan decreases, but only knit a few more rows anyhow, so I don't think it make much difference. (As it turns out, the intention is to continue neckline decreases and continue decreases on 2nd and 3rd marker, which makes sense. I'm still not sure what the "ONLY" is for.)

Then I got to the collar. There is a seed stitch border along the button bands, which extends up around the neckline. As I'm knitting, this means that the first and last 6 stitches on the needles are the seed stitch. The instructions say to knit the first 6 stitches (seed stitch) and put them on a stitch holder, bind off stitches all across, and then place the last 6 stitches (seed stitch) on a holder. Ok, got it. Then you are supposed to rejoin yarn to one of those sections (the right, but I'm never sure which right is intended) and then continue the seed stitch band, to be attached to the bound-off neckline later. Instead, when I got to the end of the row rather than putting those stitches on a holder, I started knitting the neckband from there. I don't know why I was supposed to put them on a holder and then just rejoin yarn, but perhaps it will become obvious in some way, like I will suddenly have an extra sleeve or something...

Now I am here: 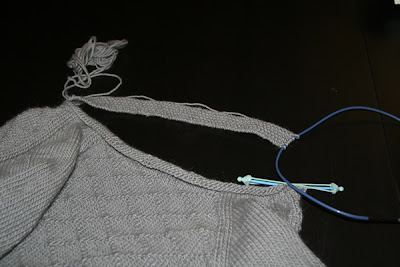 I am instructed to sew the band to the back neck "using slipstitch" and then graft the live stitches to the one on the stitch holder. None of my knitting books provide instructions for seaming in slipstitch. A Google search revealed this, but that doesn't seem right since it results in a bulky seam. I also couldn't find instructions for grafting seed stitch. So I posted a query on Ravelry for help. I really thought the instructions should have been more clear on these matters. But to her credit the designer responded to my query within two hours, which is pretty awesome because I am nothing if not impatient.

She says that when she attached the neckband she used "more of a flat sewing stitch where you go into the neckband and then the edge of the sweater, keeping both flat and edge-to-edge." That sounds kind of like whip stitch to me, so that is probably what I'll use. As for the grafting, she grafted in the normal way and then duplicate stitched the appropriate purl bumps on. Clever.

I really hope I finish this sweater sometime today. It is so close I can almost taste it!
Posted by 3goodrats at 1:14 PM