Finished: Lucy in the Sky Cardigan 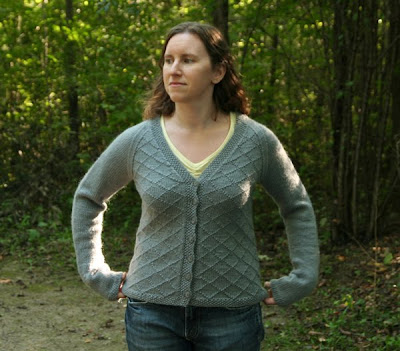 Pattern: Lucy in the Sky by Laura Chau - from cosmicpluto knits
Size: 35, but blocked a little larger
Yarn: Brown Sheep Lamb's Pride Worsted. I bought 6 skeins, but only used 5.
Needles: Size 7 (size 8 for the sleeves)
Yarn and buttons are from Windsor Button in Boston. Thanks, Annmarie, for helping me pick out buttons!

This took me 4 and a half months to knit, which is actually not terrible considering that I knit some other things during that time as well. It fits perfectly. (I deliberately made the arms a little long.) While I was working on it, the bottom band kept flipping up and I was worried about that, but it blocked out very well. I like the stitch pattern a lot, and tried to get buttons that didn't stand out too much because I want this to be a versatile garment that I can wear with anything.

What I would do differently if I were making it again:

- Paid more attention to the relationship between the stitch pattern and the raglan decreases. I think pattern designers give us all a little too much credit for being able to figure this kind of thing out on our own. By the time I figure out what I should have done, I'm way too far through the thing to change. My raglan seams look fine, just not perfect.

- On the collar I would have done the decreases at the 2nd and 3 markers as indicated (which I didn't understand from the instructions). I think it would have only been one more decrease, but that may have helped. As it is, the collar doesn't sit quite right, though it may only be noticeable to me.

- I would not have used whip stitch to attach the collar. It doesn't look good, but I don't know what else to do. I can't figure out what the designer actually did. The only other way I know to attach pieces is mattress stitch, which creates a seam. That doesn't work here - it eats up the edge stitches so the collar isn't the same width the whole way around. I don't know what I would have done, I guess, other than pressed the designer for more details or maybe posted something on Ravelry.

- Again with the collar - I would have knit from both sides of the neck to meet in the middle because the kitchener is visible and I would prefer it on the back of my neck, not the front of my shoulder. Perhaps there is a way to kitchener the seed stitch to make it invisible but I don't know how, so I should have done this differently. I wish I had thought of it earlier. (I still could have ripped back and done it, but I am lazy/impatient.) I don't think it's visible to the lay person, but I can see it.

Overall, I am quite happy with the pattern and the project. New sweater, just in time for fall! 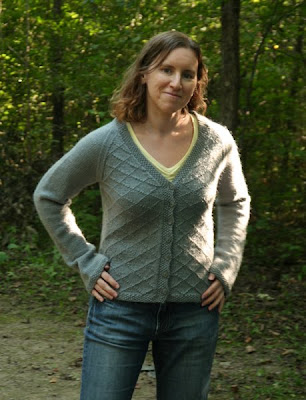 It looks great! With the color, the style and the button choice, I am sure you have created a very versatile sweater that will get a lot of wear.

It looks amazing! I know i saw it in person, but the pics are fabulous and the buttons look perfect, great job!

It's so beautiful! I'd totally buy this. Very impressive work, lady.

Grrrr. I wish I had found this post *before* I finished my collar. It really looks odd, I am hoping blocking rescues it!

Oh no! I hope it comes out ok!