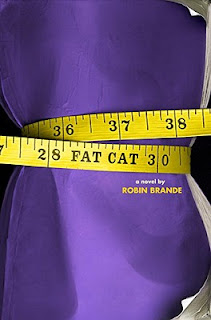 You can tell from the cover that this is another angsty weight loss/body image book, but it is so much more than that. The story opens at the beginning of the academic year as Cat sits in the most terrifying science class yet. Each student pulls a picture out of a stack - without looking - and then must design a research project based on the picture they chose. After devoting the entire academic year to these projects, they are then entered into a regional science fair. Cat has spent the summer studying fig wasps (no, I don't know what they are either) and hopes to get a picture of something biology-related, but instead ends up with a picture of early humans fighting over an animal carcass. From this, Cat embarks on a daring project that challenges her intellectually and physically.

Although the personal changes she is going through as a result of her project are significant, Cat is also preoccupied with her ex-friend Matt who is also in the class and who has won every science fair except one, the year that their friendship ended. In addition, she's trying to help her best friend Amanda save the local vegetarian cafe where she competes in poetry slams. (Honestly, the characters in this book were so multi-talented and involved in so many projects it made me envious, and also exhausted.)

I'm a sucker for any book that touches on food issues, and this one took a different approach than other works of YA fiction. The issues were still personal, but being part of an academic project showed them in a broader and more multifaceted context. It was right up my alley. But it wasn't all serious - there was a whole subplot in which Amanda tried to coax Cat into dating, which she had long avoided, and made for some pretty amusing scenes. In fact the writing was humorous throughout the fast-paced novel (which I read in about two days, quick for me!) and Cat came across as quick-witted and self-deprecating but also very thoughtful, strong, and well-grounded. Though the ending was predictable, I was very glad of the outcome. All in all, I thought it was great - highly recommended!
Posted by 3goodrats at 3:34 PM