Her Fearful Symmetry : a review 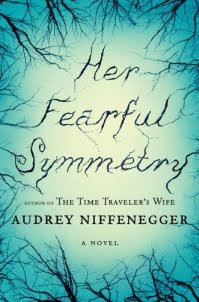 Audrey Niffenegger’s second novel is a big departure from The Time Traveler’s Wife. It begins with the dealth of Elspeth, who leaves her flat to her American twin nieces. They are required to stay there for a year before selling it, so they travel to London and take up residence in the building with its delightfully quirky residents. Elspeth, however, is still in the flat – or at least, her ghost is. The premise is a bit dubious for someone like me who isn’t a fan of life-after-death scenarios. But it works reasonably well, for a while anyway. The actual plot of the book, however, doesn’t fare so well.

I had heard that the last part of the book wasn’t very good so I went into it with low expectations. I don’t really know what to make of it, but I will discuss that more below the spoiler warning. But I will say that there are a few too many twists in a row, as though that part of the story was just sort of cobbled together in a brainstorming session. All in all, I’m still glad that I read the book. The characters were great, though I have to agree with the Cable Girl that they deserved to be in a better book. (Especially Martin – oh, Martin, a whole book could be written about just you!)

Mostly, this book made me want to read Edward Gorey. It had that feel to it somehow.

SPOILER BELOW
*
*
*
*
*
*
*
*
*
*
*
*
*
I absolutely don’t understand the ending. Robert has a brilliant idea about how to fix his situation and then he is suddenly gone. I assume we are supposed to know what he was thinking and where he went but honestly, it is hard to know at this point what the characters would do, as much of their actions near the end of the book seem rather out of character. Did he simply leave Elspeth? Did he kill himself to be with Valentina? I have no idea. Please leave me a comment if you have any insight into this confusing ending.
Posted by 3goodrats at 8:56 PM

I liked the book a lot, but didn't love it. The ending was a big abrupt. I just thought that Robert simply said *F-You* to Elspeth and left her. She was certainly a crazy bitch and deserved it, I thought. I had a hard time believing that Robert & Valentina had such strong feelings for eachother. She didn't develop that relationship very well.

I think I agree with you on all points.