This World We Live In : a review 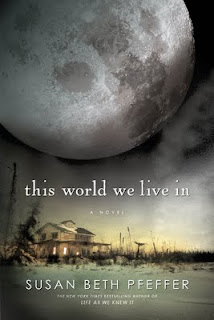 In the third and final installment in the trilogy by Susan Beth Pfeffer that began with Life As We Knew It, the characters from the first two books finally meet each other. Narrated again by Miranda from the first book, through the pages of her diary, we hear more about the family’s struggle to survive. Miranda’s older brothers leave for several days on a fishing trip and return with not only lots of fish, but a new “wife” for her older brother. The concern about the extra mouth to feed is soon overshadowed when their father also returns with his wife and their new baby, as well as a new friend Charlie, and Alex and Julie from book two. The family has now grown to 10 people and with the house so crowded, they eventually spread out into the neighbor’s house as well.

This book has little forward momentum, and almost none of what I was hoping for. The first two books got us used to the catastrophe and the new set of circumstances in which everyone is living; I hoped that this book would give us a feeling for what was to come – will humans be doomed, or will they begin rebuilding society? But unfortunately, I have no idea. Those questions weren’t answered, and the book doesn’t feel final at all, though the author says it’s the end of the series. It ended rather abruptly as well, with a weather-related catastrophe, and then it all wrapped up very quickly. It left me unsatisfied and disappointed.
Posted by 3goodrats at 10:04 PM