The Age of Innocence : a review

The Age of Innocence by Edith Wharton (1920) 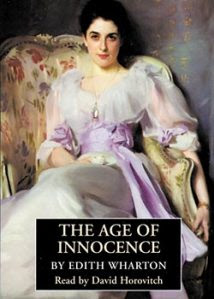 Young Newland Archer is freshly engaged to May Welland, when her cousin Ellen Olenska arrives in New York amidst a fair bit of scandal. She has left her brute of a husband and there is talk that she may have been involved with another man. She is even considering divorce (gasp!) Newland is quite taken with Ellen and promptly tries to convince May to move their wedding date up. You can see where this is going. Newland and May marry, but he continues to combat his deep affection for Ellen. Divorce in this place and time is so controversial it is almost unthinkable (see: Ellen Olenska), so Newland’s problems aren’t as easily solved as they would be today.

Wharton’s book was originally sold as a “problem novel” about divorce, and though cultural mores about marriage and divorce have changed enough for the novel to seem a bit dated (and certainly to lessen the dramatic impact), there is still much food for thought. Newland lives in a restrictive society and yearns to be free of certain rules and obligations, yet his life isn’t unhappy. Who’s to say that he would have been any better off had he pursued Ellen?

I’m a sucker for these period novels, and Wharton’s writing was a pleasure to read. At times I was frustrated by the choices the characters made, not to mention their apparent thickheadedness, but in retrospect I’m glad because the resulting complications gave me so much to think about. If you’re interested classic novels of missed opportunities and thwarted love, I’d recommend giving this novel a chance.
Posted by 3goodrats at 9:21 PM