I recently finished a baby sweater for a coworker. There was only a small window of time between finishing and wrapping it, and the light was pretty bad during that time, so I apologize for the photo quality. The color is rather washed out, but at least you can get the idea. 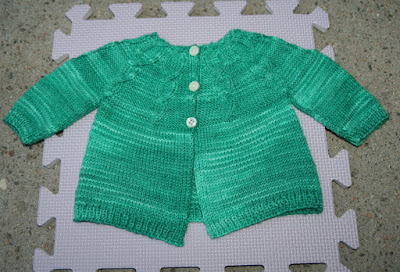 I used a pattern called Korrigan, which was originally written in French, but has an English translation. It used some language that was shall we say, non-standard, but I managed to figure it out. I'd caution less-experienced knitters against using this pattern (unless you have someone to help you) because it could lead to frustration and errors.

It's a pretty adorable sweater though, isn't it? The yarn is Breathless from Shalimar Yarns, and it's a blend of merino, silk, and cashmere. The color is just beautiful, and I really do adore the cabling around the yoke of this sweater. It's hand-dyed so it pooled a bit, but I sort of like the effect. I found these plain little white buttons at home, which was lucky, though it took me at least a week to drudge up the wherewithal to sew them on.

If we're lucky, maybe I'll be able to post a modeled photo sometime after the baby arrives.
Posted by 3goodrats at 10:31 AM