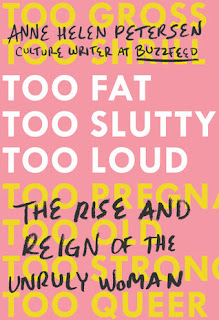 Each chapter of Buzzfeed writer Petersen's book focuses on a different female celebrity who is unruly in some way, and examines her particular way of being too something. Subjects include Serena Williams, Melissa McCarthy, Abbi Jacobson and Ilana Glazer, Nicki Minaj, Madonna, Kim Kardashian, Hillary Clinton, Caitlyn Jenner, Jennifer Weiner, and Lena Dunham. Some I'm familiar with, some I dislike, and some I had never heard of, but all are controversial in some way and don't quite fit society's mold of how women should be.

I really liked the idea of this book, and the format. Devoting a chapter to each woman gives the reader a chance to get to know that particular person thoroughly. It's still thematic though, as each woman is "too" something different. For instance, Hillary Clinton's chapter is entitled "Too Shrill," and Jennifer Weiner's "Too Loud."

The most interesting to me, I think, was "Too Pregnant," the chapter on Kim Kardashian. The Kardashians are barely on my radar, as I don't pay much attention to celebrities, especially the ones who are famous for no real reason. My impression of this family is that they are shallow, attention-seeking, and of no interest to me. However, I am familiar with the standards to which celebrity women are held, and when one is pregnant there are certain expectations. For instance, a celebrity should remain skinny and toned, but appear like she has a basketball under her shirt. She should be happy and glowing. Kim Kardashian apparently gained weight all over (as women typically do when pregnant) and suffered through a pretty horrible pregnancy. She was uncomfortable and that made her unhappy; she definitely didn't glow.

On the other hand, and in the same extended family, Caitlyn Jenner's chapter ("Too Queer") didn't especially seem to fit in. She's definitely outside of the box in some ways, but Petersen spent a lot of time talking about how much she does fit in with what makes an "acceptable" trans women. She did note that Jenner has brought to the fore many other trans women who don't fit that mold as well.

I've never paid much attention to Lena Dunham ("Too Naked") and find her sort of annoying, but now I have a new appreciation for her. Her character on Girls is awkward and wears unfashionable clothes that don't fit. She is in a lot of romantic and sexual situations and the driving narrative of the show is that the audience sees her as imperfect, but she's confident and sees herself as sexy and desirable.

We are all familiar with Hillary Clinton, obviously, and this chapter mostly just made me sad. Well, angry and sad. It's summed up in this paragraph:

The other woman in this book with whom I was most familiar is the author Jennifer Weiner ("Too Loud"), who is well known for speaking out about the gender imbalance of authors reviewed by highbrow publications, especially The New York Times Book Review. I remember when this all happened, and reading this made me angry all over again. Basically, books by women are simply not taken as seriously as those by men and although there are just as many women as men writing books (or maybe more, actually) it's rather suspicious that such a high percentage of reviews are about books written by men. Many books by women are relegated to the chick lit category, which is considered total fluff, even though books by men which also focus on things like relationships are pretty much considered literature. Weiner was very critical about this and of course there was a backlash.  As an aside, I question Petersen's definition of chick lit as "masscult" books that feature "romance, shopping, and other activities women do." Is romance an activity? Anyhow, chick lit is less about the activities and more about the writing style, if you ask me.

All in all, I really enjoyed this book and its in-depth look at women who push boundaries, even if they aren't all viewed as being feminist icons. It goes to show there are many different ways to be a feminist and it actually made me feel hopeful.

Also, I get to check off another category in my Personal Reading Challenge: feminism. I've got four more categories and four more specific titles to go.
Posted by 3goodrats at 7:30 AM