The Swans of Fifth Avenue

The Swans of Fifth Avenue by Melanie Benjamin (2016) 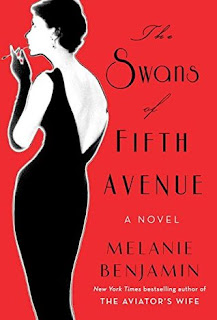 The novel opens with a conversation about a murder. Several wealthy women sit at a trendy restaurant in 1975 and accuse one another of letting Truman Capote into their social circle, which they say led to a death. You don't yet know who died or how it happened, but as the story proceeds it moves back and forth in time, filling in the details. At the heart of the novel is the intense friendship between Truman and a woman named Babe Paley. Much of what occurs in the novel is based on real-life events, but as Benjamin explains in the Author's Note at the end, she had incredibly leeway in writing this book simply because so many of the people involved were chronic liars, so anything is possible.

Babe fascinated me. She was known for her beauty, she was always impeccably dressed and completely gracious. But her marriage was pretty much a sham. Her husband no longer desired her and had many affairs. She was incredibly lonely. Truman was exactly what she needed in a friend, and he was the only person with whom she was completely honest. Injured in an accident when she was very young, Babe had false teeth and facial scars, but nobody except Truman ever saw her without her teeth and full makeup, even her husband. Her existence seemed exhausting, the constantly facade she had to maintain, and for what?

Truman was very hard to pin down. He was genuinely devoted to Babe, and even to some of their other friends, but he lacked good judgement. He eventually published a story full of their secrets, told to him in confidence, and somehow thought they wouldn't be angry at him. Throughout the novel he turned from a young, fun, promising writer to a troubled, unhealthy, heavy drinker who was crushed by the pressure to write something that could live up to the mastery of In Cold Blood. It left me wanting to read more about his real life.

This book was just full of flawed characters who did awful things to each other, but with whom I couldn't help but sympathize. I loved all the glamour and drama and secrets. I read this on my vacation, and it was just perfect for a sunny day lazing about drinking cocktails on a cruise ship. But I imagine I would have enjoyed it just as much had I been at home.
Posted by 3goodrats at 7:30 AM