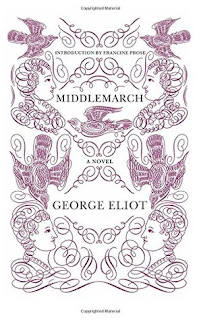 I had no intention of reading this giant classic anytime soon (or possibly ever?) until a good friend invited me and another friend to read along with her this fall. I'll never turn down a read-along so of course I was on board! We began in October and gave ourselves until the end of December. Although Middlemarch is just over 800 pages - long but not monstrous - it's 800 pages of dense, tiny print, and Eliot's writing is the sort you really need to think about while you're reading. If I try to read something written in this style just before I go to bed, I end up reading the same sentences over and over without ever understanding them. So, I knew it would take a while and I knew I'd be reading other books at the same time. The danger is the very real possibility that by the time I finished, I'd forget everything that happened at the beginning. But I think I have a pretty good grasp of what I've read.

The story takes place in a small town in England in the 19th century and follows a few different threads, most of which relate to romance/marriage and everyone's difficult financial situations, and the relation between the two. At the center is Dorothea Brooke, a young woman who, despite appealing alternatives, decides to marry a cranky old man who is devoting his life to writing a bloated academic treatise. Dorothea, being a rather intelligent person who wants to be useful and productive, looks forward to helping him with his work, and spending hours discussing important issues and learning from him. But their marriage is not at all what she had envisioned, and she quickly becomes despondent. She befriends a young relation of her husband named Will Ladislaw, and the two strike up an intense friendship.

A young doctor, Tertius Lydgate, is a newcomer in town who has lots of newfangled ideas about medicine. He soon marries the widely-admired Rosamond Vincy, but when his practice is clearly struggling and he tries to suggest they cut back on expenses, Rosamond becomes extremely upset and accuses him of trying to make her life difficult. She just wants to borrow money from other people, and ignores Lydgate when he tries to explain that's not a sustainable way of living. Honest to God, I hated Rosamond so much. She was completely immature and self-centered and Lydgate didn't deserve being married to such a horrid person.

The other central relationship is between Rosamond's brother Fred and Mary Garth. Fred is sort of a good-for-nothing young men, well-meaning but unambitious. Mary - the most sensible woman in the book - refuses to commit to him until he can prove his worth. He just needs to grow up and figure his shit out. This story line was a little less present than the others, and I wish there was a bit more to it. I liked both Fred and Mary, and I was totally rooting for Fred to get his act together so they could marry. I wish Mary had more of a story because, as I said, she was the most sensible person in the book. But I guess when you're not making terrible decisions, there's not as much of a story.

Lest you think this novel is only about marriage, there are other plots, such as one about a man named Bulstrode who is hiding secrets from his past. He was not always from Middlemarch and it took a very long time to be thought of as anything other than a newcomer. But eventually he was accepted as a member of the community. But during the course of our story, a sketchy man named Raffles arrives and threatens to reveal unsavory secrets from Bulstrode's past. He blackmails Bulstrode, threatening to reveal everything if Bulstrode doesn't keep giving him money.

There are also some sub-plots about political/religious situations that I didn't entirely understand, so I can't really tell you about those.

In this society everyone just relies on others for money through inheritance, marriage, or borrowing. It's so weird seeing this as a 21st-century American, because all I could think throughout the book was, why don't you get a job? Or, maybe you need to spend less money than you take in, not more. It's just so weird to me for people to expect money to just be given to them. I know there were people a that time who did work their butts off for everything they had, and it wasn't much, but this particular book centers on those who seem to feel quite entitled and at times I wanted to smack them (I'm looking at you, Rosamond!)

There are a few things about the book I didn't like. About 3/4 of the way through, I made a note to myself that all the women in this book act like children. Eliot is not kind to her sex. When the women are upset, she describes their fat tears and trembling chins and pouting, none of which conjure images of adults. Rosamond was the very worst, but even Dorothea, the most intelligent and complex woman in the book, acted like a petulant toddler at times. Mary Garth was the most consistently positive character, with her strong ethics and good judgment, but even her goodness often came across as wide-eyed and childlike.

Every single chapter begins with an epigraph of some sort. Some are attributed, some are not, and some are in non-English languages and untranslated, as though even George Eliot knew we don't pay attention to them anyway. I don't know, maybe you do, but to me they feel so disjointed. They're not actually part of the text and I assume they allude to it in some way, but I'm just not going to go back to each one after reading the chapter so I can say, "Ah yes, now I see why she chose this." Honestly, I don't really see the point of using these, especially at the start of every single chapter.

My third and final criticism is that I'm just not convinced it was necessary for the book to be this long. I suspect I might be wrong in this. I think I just expected it to be more...epic? My view may be based more on the length it time it to me to read than the actual length of the book.

Otherwise, I did like the story.  I was thankful for the moments of humor that occurred now and then. From describing someone as "superfluously tall" to the scenes in which Dorothea's sister assumes everyone else is as obsessed with her new baby as she is, the lighthearted moments were a nice break from what is primarily a pretty serious novel.

I tend to like stories about domestic life in small English villages, pretty much in any time period. I liked the complexities and frustrations of the various marriage situations, and I appreciate the difficult position of the women in that time period. While I didn't love it, I did like it enough that I might be tempted to read some of Eliot's other works someday.
Posted by 3goodrats at 10:28 AM