A Princess in Theory

A Princess in Theory (Reluctant Royals #1) by Alyssa Cole (2018), narrated by Karen Chilton 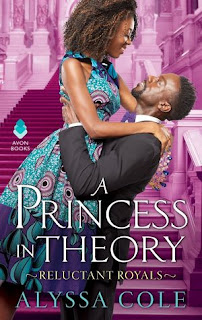 Busy, working graduate student Naledi starts getting emails claiming she's betrothed to an African prince, which she deletes because of course they're spam BUT THEY'RE NOT SPAM. Prince Thabiso has to travel to New York on business and decides to seek her out in person, which goes terribly awry when she mistakes him for a new hire at her waitressing job and he plays along with it only to set a table on fire. Needless to say, it's not a good impression. But when he turns up in the apartment next door to her and offers to cook her dinner, they smooth things over and soon it starts heating up between them. But she still thinks his name is Jamal and he doesn't reveal his real identity, or their shared background, so that's rather a ticking time bomb.

Naledi only remembers New York. Her parents were killed in a car accident when she was very young and she grew up in a series of foster homes. None of them stuck and she is without family, struggling to complete her education. She needs an internship and hasn't heard back from the person she's supposed to be interning for, and this is a great source of stress, in addition to the demands on her time with school and two jobs. Even as she becomes more and more attracted to the guy she knows as Jamal, she is convinced that their relationship won't go anywhere.

The setup alone was enough to get me to read this book, but the execution was fantastic. Naledi definitely has some self-esteem issues when it comes to relationships, and the knowledge that Thabiso was lying to her about such huge issues really hung over me throughout the story. But not too long - this isn't one of those stories where it all comes out very late in the book and then they get over it and live happily ever after. No, there is a lot more to this story and that's what makes it so good.

When all is said and done we learn about Thabiso's country and his life, the issues facing them and why they're all counting on him to get married, the whole story behind Thabiso and Naledi's childhood betrothal and, finally, why Naledi's family fled Thesolo and started a new life. Throughout, Naledi tried to come to terms with Thabiso's lies, her attraction to him, and how the situation would affect - or not? - her life. They were both such great characters. Naledi down-to-earth and practical, but passionate about her work in public health, Thabiso raised to have his every need served but still empathetic to the needs of his people.

Literally the only thing wrong with this book is that when Naledi learned Thabiso's real identity she never expressed concern about what happened to the real Jamal, who probably really needed that job. (Thabiso intercepted him outside and paid him something like $20k to not go in, so he's fine. She just doesn't know that.)

The audio narrator was great (she did the accents, though I have no idea if she based the Thesaloian accent on a real African language) and I thought this was a great choice for audio. I mean, there were some sexytimes that were fairly graphic and I always feel a little weird listening on the bus even though I know nobody can hear what I'm hearing. But overall it was a fun and satisfying listening experience.

Fun fact: Alyssa Cole is known for her great dresses, which she buys from an Etsy shop called Adorned by Nicole. The dress on the cover is actually a dress designed by that shop. So if you love it (and why wouldn't you?) you know where you can get one.

The book I've been reading in print at the same time as this one is Just Mercy by Bryan Stevenson, which is all about our horrible broken justice system and innocent people being executed. But we have to also read things that make us feel good and remind ourselves why life is even worth living in the first place. So do yourself a favor and pick up a story that you know is going to end well - like this one. As much as we need to pay attention to horrible stuff happening around us, sometimes we also need to escape for a little while.
Posted by 3goodrats at 10:14 PM