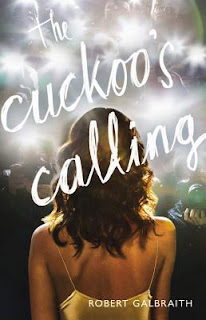 This is the first crime novel by J.K. Rowling, who initially published it under the pseudonym Robert Galbraith. I've heard great things about it - about the whole series - and I love all of Rowling's other books, so it was only a matter of time before I read it. Of course it's fairly long so I kept putting it off, and it ended up on my 2018 TBR Pile Challenge list.

The story opens on the aftermath of an apparent suicide. A famous model has jumped from her balcony, and police and paparazzi swarm the street outside her London home. But her brother refuses to believe she killed herself and hires private detective Cormoran Strike to investigate. One witness, a resident of the building's first floor, claims to have heard Lula Landry arguing with a man before falling to her death, but is this witness credible? Is there something suspicious about Landry's down-and-out friend Rochelle, who seems like she doesn't want to be found? And what of Landry's estranged boyfriend? The police consider it an open-and-shut case of suicide, but to Strike too many unanswered questions remain.

Cormoran Strike is in the midst of his own difficulties. As the story begins, he's just begun living in his office after a devastating breakup, business not healthy enough to support his renting an apartment. He has a new secretary sent by a temp agency, Robin, who is fascinated by Strike's work and dreads being moved on to her next job. This tension permeates the novel, as Robin proves herself worthy of more than just administrative duties due to her cleverness and resourcefulness, but Strike knows he can't afford to keep her on. Robin is engaged to a guy named Matthew who disapproves of her working for Strike, and I kept hoping she would dump him. It's a sketchy situation really, working for a guy who is clearly living in his office but trying unsuccessfully to hide that fact. He also tries to hide his prosthetic leg, crankily urging Robin to leave when he's been walking a lot and just needs to take his leg off for some relief but refuses to do so with her there. I loved seeing their very different personalities interact, especially as the story progressed and they got more comfortable with each other.

Along the way, we learn a lot about Landry's life. Her adoptive family, as well as her reconnection with her birth mother and search for her biological father. We also meet her friends, both the unlikely - Rochelle, who she met in rehab - and the other models as well as a designer she modeled for and had a close relationship with. We also learn about Strike's life: the son of a groupie and a rock star, everyone knows who his father is and mention him whenever they meet Strike, but he himself has only met his father a couple of times. The similarities between Landry's and Strike's life were apparent, but so were the vast differences, but both characters were fully realized even though one was already dead when the book began.

It was long, as I mentioned, but not unnecessarily so. The mystery of Lula Landry's death had many twists and turns and it took Strike - with Robin's help - a long time to investigate all the leads. It did take me a long time to read, but it was definitely worth it. There are two more books in the series, with a fourth to come later this year, so I look forward to picking those up at some point.
Posted by 3goodrats at 7:30 AM