Way back when Barack Obama was president,* I started a sweater. That was in May of 2016. It is not insignificant that we had just gotten a dog the previous August, because my knitting has slowed down considerably since then. Time is a factor, sure, but the larger impediment to knitting these days is having a grabby many-toothed beast at my side at all times, wanting to know what the hell that thing in my hands is and needed to both smell and taste it. So these days, I need to steal away and do my knitting alone behind closed doors, usually while listening to podcasts or audiobooks rather than my old way of knitting while watching tv. This is all to say that it has taken me almost 2.5 years to knit this goddamn sweater. 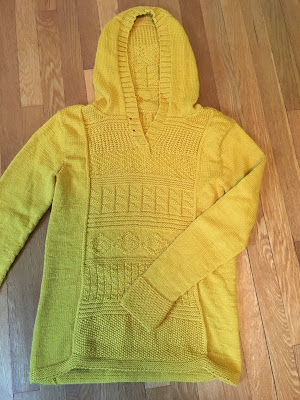 And yes, the sweater is lying on the floor for these photos because if I were to wait until a good time to get modeled photos it would probably be another six months. The weather has been crappy, I don't have a picturesque background nearby, and my skin is a mess. So this is what you're getting.

I can tell you that the sweater fits okay, though it's a bit long and hugs my butt in a way that's not exactly flattering. But usually they end up stretching a bit width-wide, which shortens it length-wise so the final verdict on fit isn't in quite yet. 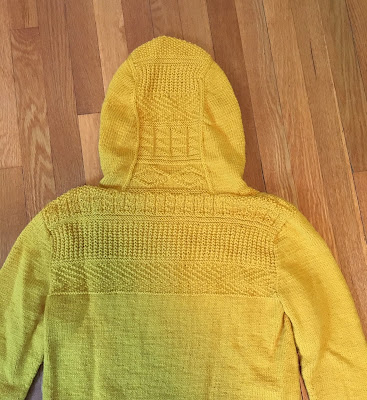 It came out pretty well, I think. It's a bit rumpled in the photos. I blocked it out all nicely, but then it was folded up and even shoved in a suitcase for a trip to Maine and back without even being taken out. I haven't worn it yet, I don't know why.

I picked this pattern because I love the interesting textures in ganseys, but this had the added challenge of a hood and a front pocket. I've been down that road before with my Rogue Sweater (pic to the right because it was pre-blog and I had photos on flick that now aren't showing up. Honestly I forgot I even had a flickr account.) I love the idea of a hoodie more than I love an actual hoodie. They look great, but are impractical to wear with a coat because what do you do with the hood? It always seems to get in the way. that's an awful lot of work to put into something that isn't practical.

However, I'm happy to say that both the hood and front pocket came out pretty well. The pocket is formed in a rather complicated way, and I had to go back and rip it out and re-do it because I attached in such a way that it didn't lie flat. I'm glad I took the time to fix it because I would not have been able to live with it like that. That was a hard lesson I've learn from the past - a lesson learned, in fact, from the above pictured Rogue. There's a cable pattern going around the hood, joining on the front neckline and I made a major mistake in the cable that is front and center on the sweater. I still wear it (I wore it a couple of days ago, in fact) but I see it EVERY TIME and it makes me so annoyed. But that was one of my first sweaters and remains one of the most complicated and I didn't know how to go back and fix it and then be able to continue without losing count of all the things I was doing at one time.

How did this turn into a post about a different sweater?

Here's a closer photo of the patterns on the front. 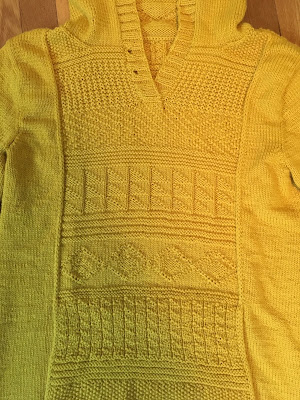 Oh, you'll notice it has a couple of buttonholes but no buttons. Well. For this I would have wanted buttons in the same color as the yarn, but how would I go about finding buttons in that exact shade of mustard yellow? I have no idea, but I'm sure I'd never actually button the neck so I decided not to even bother trying. I made buttonholes in case I ever changed my mind.

So there you go: my first finished knitted thing in quite a while. You know, I actually also recently finished a pair of socks and even took photos, but socks don't really need an entire post so I'll put those in my monthly wrap-up, which will come (hopefully) in less than a week.