Hurts To Love You 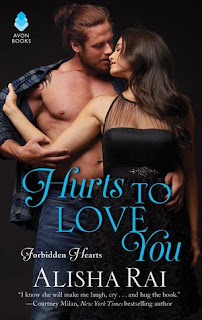 At this time last year I read the first book in this series, Hate To Want You, moved on to Wrong To Need You this past spring, and now I've finished the trilogy. I've been very good at finishing the series I've started recently!

The heroine of Hurts To Love You is Eve Chandler, the youngest of the Chandler siblings. She is often referred to as "Baby Chandler" which she likes as much as any grown woman would. Eve wants people to start taking her seriously and treating her as an adult, and that includes her long-time crush, older guy Gabe Hunter. When Eve was in college - not many years ago - she hit on him in a bar when she was drunk and he rebuffed her, but she is determined to try again with him. Now is the perfect opportunity, because they'll be together for a week as Livvy and Nicholas (from the first book) get married. The wedding party is meeting up to stay at a house together in the days leading up to the wedding, but for various reasons, most people are arriving late which means that Eve and Gabe have some time alone together.

Gabe is the son of the housekeeper for the Kane family, so he grew up very close with Livvy, Jackson, and especially the now-deceased Paul. Gabe is more of a one-night stand kind of guy than a relationship guy, but this is a romance novel so obviously that is going to change. He sees Eve for the first time in a while when they meet for a wedding cake tasting. Livvy is sick and can't taste anything and Nicholas is, I think, out of town on business so the two of them are standing in for them. This is the moment when Gabe realizes Eve is no longer inappropriately young for him.

Despite her wealth, Eve is driving for a ride-share company and has been making sure she is there to pick up Gabe when he needs it, but she does so in disguise. She's trying to make her own way now that she no longer works for the family business, but she's also doing market research for her own company, which will be a competitor for Ryde. She feels a little bad for stalking Gabe, but doesn't realize that Gabe may become attracted to his driver "Anne" and that might make him conflicted about Eve.

So the romance is all well and good, but as with the other books in this trilogy Rai has done such a great job with all the family drama and character development that is really what I'm here for. I love Eve. I love her imperfections and her determination to prove herself, and the way she gives herself pep talks because she is trying to be more confident and assertive. She grew up being bossed around and emotionally abused by her father, and she is no longer having it. Her brother Nicholas is over-protective and keeps treating her like a child and she will not take that anymore either. She is done trying to please everyone, and through the course of this book she is all about acknowledging what she wants and taking steps to get it. She gets some great sisterly advice from Livvy about this, too, which really bolsters her determination. I really love Livvy.

I'm less in love with the guys in this book. Nicholas really seems like an ass, even though I liked him in his own book (Hate To Want You). The way he treats Eve is really grating, but there's a fantastic conversation in which Livvy lectures him about how Eve is an adult and he needs to treat her like one. It was a really good feminist moment (and not the only one in the novel.)  Gabe is fine, but I find it hard to trust a guy who doesn't like sweets. He hates sweets. What is wrong with him?

Oh, but the family story! This has been a long arc through all of the books and I am very much here for it. I love a good family saga. The relationship between the Chandlers and Kanes began as a business partnership and friendship, weathered the imprisonment of one of the original partners in a Japanese internment camp during World War II, and was essentially destroyed when Eve's mom and Livvy's dad were killed in a car accident together and there was a lot of fallout including the Kanes being robbed of their part of the business. The two families have been enemies since then, and this wedding between Livvy and Nicholas is the first official reconciliation between them. A lot is riding on this. Some members of the family want the old animosity put to rest, but some - like Nicholas and Eve's father - cannot bear the thought of the two families reuniting. In the course of the book, we learn even more about the fraught history of the Chandlers and Kanes as more secrets are revealed.

I'm actually a bit sad that the series is over because I've gotten really invested in these families. Alisha Rai is one of the better romance writers I've come across and I follow her on Twitter and I've really enjoyed her interviews on the Smart Bitches podcast. I'll be looking out for her next book, for sure!
Posted by 3goodrats at 12:46 PM