Tisha: The Wonderful True Love Story of a Young Teacher in the Alaskan Wilderness (1976) 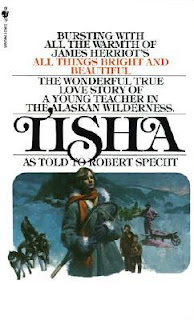 In 1927, nineteen-year-old Anne Hobbs left Oregon to teach in Alaska. She was lured by the promise of adventure, and she definitely got what she was looking for. The trip to the tiny village of Chicken was long and hard, and when she arrived she found her quarters bare. The other villagers donated a mattress and a stove, dishes and other supplies, and soon she had a cozy little place for herself. Her quarters shared a building with the schoolroom where she would be teaching a handful of children of various ages.

Anne got settled in and started up the school and almost immediately found herself the subject of disapproval. She befriended a "half-breed" named Fred Purdy, who had an Indian mother and white father, and Fred is her romantic interest. Their romance had a slow build, and people went to great lengths to keep them apart. Anne also let Indian children into her classroom, which meant other parents pulling their kids out. The people in this village really did not seem to like Indians and it was pretty weird, since they did somewhat live intermixed with each other and there were obviously some mixed-race families. Anne, whose beloved grandmother was an Indian, did not care at all whether someone was Indian or not and it got her into a lot of trouble. She was strong for such a young person who was new to the area, and she held her ground most of the time. She was very brave!

Life here was not easy, but things improved when a teenager (I think? The story wasn't clear on people's ages) came to stay with her and help her out. Households were pretty bare-bones and it took a lot of work to do things like wash clothes or take a bath, and the extreme cold and harsh weather made things even more difficult.

Things really heated up when the mother of two of Anne's students died, and their white father didn't want to take them. Anne decided she would take them, and she and Nancy did pretty well for  while until Nancy's mother found out and sent for her to come back home. Everyone disapproved of Anne taking the kids, insisting they be sent to an Indian village nearby. They went to great lengths to make that happen, and Anne went to even greater lengths to prevent it. It was a very exciting story and when I got to this part I ended up reading late into the evening because I could not put it down.

I always love a story about a woman moving to a new place and starting a life there. In this case she knows she's only staying for a year before being assigned to a more permanent teaching position in the town of Eagle, but it was still effective. She still had to get used to living in Alaska, get used to people in the town, figure out who her friends were. Because it's a book about prejudice, there's some pretty harsh language, including use of the n-word. These are a straight-talking people, and I was surprised the first time she met the Indian children she would adopt and they swore like adults. There were also some charming phrases I hadn't heard before, like when she talks about the local prejudice as "half-breed baloney people around here were always slicing" and said "That got my Irish up." I should also mention that the title comes from the way the Indian children mispronounced the word "teacher." When I began reading, I was surprised that her name was Anne and not Tisha, and it took me a while to figure out why that was the book's title.

I heard about this book a few years ago from our teen librarian at work. I think she had just learned about it at a conference or workshop and read it right away and loved it. I came across it recently and was reminded that I wanted to read it. It appeals to me in a similar way as Caroline, which I had just finished. I've read so few books about women forging lives in recently-settled places and would be interested in finding more, so please let me know if you have suggestions!
Posted by 3goodrats at 9:22 AM