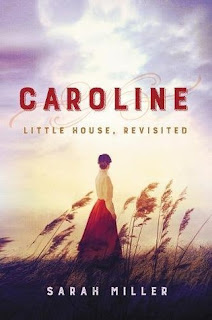 As you may know, I'm fairly obsessed with Laura Ingalls Wilder. I've read the Little House books over and over, and a couple of years ago I read Pioneer Girl, Laura Ingalls Wilder's annotated autobiography. As much as I enjoy the Little House books, I know they're fiction and children's books and I want to know more about that family and their experiences. I have two related books on my TBR Pile Challenge this year. One is a biography of Wilder called Prairie Fires, and one is this fictional work told from the view of Ma, Caroline Ingalls. This challenge is made up of a list of books I've been putting off, so it may seem strange that I keep putting off books on a subject I claim to be obsessed with. Prairie Fires is very long, and I always delay long books. With Caroline, I was just concerned that it wouldn't live up to what I wanted it to be, especially since I didn't hear much from the reviews and the Goodreads rating is fairly low. I needn't have worried: it was everything I wanted it to be.

The story begins in Pepin, Wisconsin or what I have come to think of as "the Big Woods." Caroline is pregnant, and the family is about to set off on a long journey to Kansas, where they will stake a claim in what as known as Indian Territory. It's a hard journey, fraught with danger, and there were a few times the family was lucky to escape with their lives. When they finally arrive, they need to build the house they will live in, plant some crops, and do all the many things needed to start their new lives. All this while Caroline battles nausea and grows more physically cumbersome as her pregnancy advances. And always the dread that her female relatives who helped deliver Mary and Laura are in Wisconsin and she will have to have the baby alone.

From the very beginning, I was completely immersed in this story. I read most of it in two days over a long weekend, finishing the last bit on the third day immediately after work. Miller's writing is richly detailed, bringing this story to life in a way the children's versions couldn't. Oh, I had always imagined the details in my mind, but this novel painted a rich portrait that filled in the gaps in my imagination. It also made Caroline into a fully realized person for the first time - in the Little House books Ma was always capable and resourceful, but I loved seeing the inner life that Miller has imagined for her. Her fears about their journey and their new life and the impending birth of their daughter Carrie, and how she always portrayed on a strong demeanor despite her fears so as not to worry the girls. Her feelings about her husband and the girls. In Little House, Laura always felt she was never as good as Mary, but in this book Caroline takes notice of the way in which Mary shows off how virtuous she is as though she's being good not for the sake of being good, but so she will gain approval from the adults. I loved that.

One of the themes of the Little House books is independence, and the stories are carefully crafted to show the family taking care of themselves without help from anyone else, which is factually inaccurate. (They got help from the government, friends, and family pretty regularly. Everyone did - nobody could survive frontier conditions alone.) But the details of this book reveal just how strong and capable Caroline and Charles had to be to get through the obstacles that faced them every day. Making a meal while traveling in a covered wagon was a huge pain and they were all so tired from their journey, but you have to eat. And the time they were caught in a horrible rainstorm, and Charles had to go out in it to build a makeshift lean-to along the side of the wagon for the horses, and then came in soaking wet without a fire to hang his clothes in front of. Their lives were perpetually inconvenient and uncomfortable, even when they finally made it to Kansas, and for the first time I saw just how strong and capable these people were. You don't get that from children's books.

This is not to say that I loved everything about Caroline and Charles. They were products of their time and sometimes their attitudes frustrated me. Caroline was deathly afraid of the Indians and just wanted them to be gone, complaining that they were all over the place. I wanted to yell at her "This is their land and you're stealing it!" and ask what she thought it would be like, moving to a place that was literally called "Indian Territory." The way she viewed these people who were being pushed off their own land, visibly hungry, was awful. But I'm glad Miller left it in there, because I don't like to pretend that people were different than they actually were. I'm totally fine with creating fiction in which people have what we think of as "progressive" views, but this is fiction about a real person who existed and who felt this way and I'm glad in this instance she remained true to her character, even though I was annoyed at her ignorance.

Although this book was written for adults, it retained the feelings of positivity I remember from the Little House books. Despite their hardships, Caroline and Charles did everything they could to cast a positive light on their lives and appreciate what they had. In this way, it feels like a wonderful compliment to the books I've loved my whole life, adding more to the story that I've always wanted more of.

Even if you're not obsessed with this family, this is a great historical novel in itself. It's richly descriptive and character-driven, filled with insights about pioneer life and the role of women at that time. Here's a paragraph in which she considers her work and that of her husband:

"Always, the scale of Charles's work dwarfed her own. In the time it took him to build a wall or plant an acre, she might knit a sock or churn a pound of butter. One task was no less vital than the other; he could not build or plant barefoot and hungry. Charles knew that as well as she did and never failed to thank her for a new shirt or a good meal. But to have a hand in fashioning something that would not be consumed, worn out, outgrown--something as grand as a house? To be able to lean against that solid wall for years to come and know that she had helped put it there? Caroline thrilled at the thought."

In a dark moment, Caroline wants to cry in anger but has no privacy and doesn't dare go outside because of the Indians. She holds it all inside while watching Charles make bullets:

"Again and again she watched the thin silver stream of liquid lead flow into the bullet mold, then pop out a moment later, hard and shining. If only she could do just that--pour all her scalding thoughts into a tight, smooth ball capable of piercing the very thing she was most frightened of."

I found everything about this book captivating, and I desperately want it to be series. If I could read about all the adventures and journeys of this family through Sarah Miller's vivid storytelling, well. But as Caroline would say, I should be grateful for what I have, and I'm very grateful for this book.
Posted by 3goodrats at 9:48 AM

Thanks for this. I will have to ask my sister Kathy if she's read it (she's obsessed with Laura Ingalls Wilder as well).