Barracoon: The Story of the Last "Black Cargo" by Zora Neale Hurston (2018) 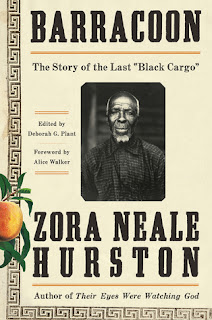 In 1927, author Zora Neale Hurston interviewed the last person alive who was brought from Africa on a slave ship, but the story wasn't published until last year. Cudjo Lewis was 86 when Hurston interviewed him, and he had experienced a lot in his lifetime. His village was destroyed by another group of African who captured the survivors and held them prisoner until they were sold to white men and brought to America. Lewis then worked as a slave for 5 years or so until he was freed. Life continued to be a struggle for him and his family.

His story is only around 100 pages; the rest of the book contains multiple introductions, prefaces, an afterward, an appendix, glossary, notes, etc. I don't have very much to say about it. I learned a little more about the role other Africans played in the slave trade, at least in this particular instance. I didn't learn much more about slavery, which I had hoped to - I thought I would get more of a first-hand story about the experience but he didn't talk about it much at all.

Hurston let him tell his own story, and I understand and respect that decision. However, he just told the story in a very simple way and that's what we got. Most books show rather than tell, but this one was definitely telling which made it difficult to really get into the story and get much out of it. Even when Lewis told about the deaths of all his children and his wife, it didn't pack the emotional punch it could have had we gotten the opportunity to get to know them first. I hate to criticize this book for not being, essentially, a novel. I do think it's an important story and I'm glad that Hurston was able to capture it. It's an interesting story, but I just didn't get a whole lot out of it.
Posted by 3goodrats at 2:22 PM