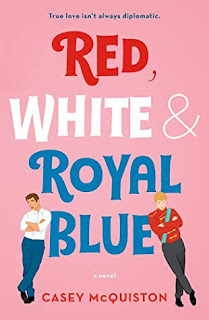 It's 2020 and the son of the first female U.S. President falls in love with the Prince of Wales. Alex Claremont-Diaz has long loathed Prince Henry, but when they get into a scuffle at a royal wedding and spectacularly knock over the wedding cake, it's a PR nightmare that can only be solved by a fake friendship. The two  young men must pretend to be good friends, but soon they find they are becoming actual friends, and then more.

There is no way I can do justice to this book. I can't convey how charming both Alex and Henry are, or how much I adored Alex's close friendship with his sister June and the VP's daughter, Nora. Or how much I loved the opportunity to live, even briefly, in a world in which a woman had won the 2016 presidential election and did not incite the rise of white nationalism. I was even able to laugh at the storyline that involved the compromise of a private email server.

Even once Alex and Henry figured out that they were attracted to each other, there were still hurdles. On Alex's end, that was his mother's bid for re-election and the potential scandal of his relationship with the Prince. On Henry's end, it was his role as potential heir to the throne, responsibility to provide more heirs, and the deeply conservative tradition of the royal family. It's a romance so you know they'll get through it, and there's a lot of fun in seeing how that will happen.

Ramon de Ocampo expertly narrated the story, infusing personality and heart and humor. Early on when their friendship was still fake, Alex added Henry to his phone contacts as HRH Prince Dickhead [poop emoji] and it was hilarious hearing that read during every text conversation, even after they fell in love. Alex never changed it and so the narrator continued reading texts that began with "HRH Prince Dickhead poop emoji" which cracked me up. There were so many little details like that.

The biggest problem with this book is the lack of a comma in the title after "White." Other than that, it's pretty much perfect. It is adorable and life-affirming and uplifting and funny and sweet. I picked it up because I heard so much about it and was looking for more books similar to those by Becky Albertalli - this was a great one to fill that need. Now I just need to find more like it!
Posted by 3goodrats at 2:39 PM