I Am, I Am, I Am: Seventeen Brushes with Death by Maggie O'Farrell (2018), narrated by Daisy Donovan 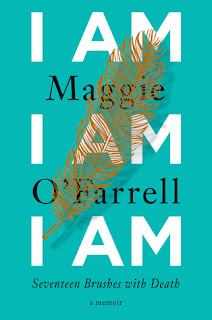 I've read a couple of novels by Maggie O'Farrell, but it's been a while since I've read anything of hers and this memoir has been languishing on my To Read list. I just downloaded it on audio through my library and listened to it in what felt like just a few days. Between the knitting and the jigsaw puzzles, I've gotten a lot of podcast/audiobook time recently!

This memoir is a bunch of snapshots, not in order, of all the times that O'Farrell has had a brush with death. The first one was the most chilling. When she was young (I think 18-20?) she was walking through the woods and encountered a guy who didn't do anything quite wrong that she could put her finger on, but who gave her a very bad feeling. At one point, while pointing out duck in a pond, he put his binocular strap around her neck. She chattered away, mentioning that she needed to get back to work before they came looking for her, and got away. She went to the police, who dismissed her concerns because the guy hadn't actually done anything. But a week later, they showed up at her door to ask questions because another young woman had also encountered him, and she was raped and strangled...with his binoculars strap. I will probably not forget this story for a while.

O'Farrell has some disabilities, aftereffects from what I think was her earliest brush with death - a bout of encephalitis when she was young, which confined her to a wheelchair for a time, caused lasting brain damage, and meant that she couldn't deliver a baby without a c-section. Later when she was pregnant and told her doctor that she would need a c-section, he refused, accusing her of reading too many celebrity magazines. (Can you imagine?) She almost died during the birth. Another time she almost drowned because her neurological problems mean that she has trouble orientating herself in space if she can't see, and it happened to be very dark.

The whole thing had a rather dreamy quality, partly because of O'Farrell's writing style and the way the book flitted around to various periods in her life, but also because of the narrator. Daisy Donovan has a very posh English accent and a soft, soothing voice that worked very well with this book. It was very good, and of course it's also a great reminder to be grateful for what you have because it could slip away at any moment.
Posted by 3goodrats at 6:04 PM

Labels: audiobooks, books, daisy donovan, i am i am i am, maggie o'farrell, memoir, nonfiction, reviews