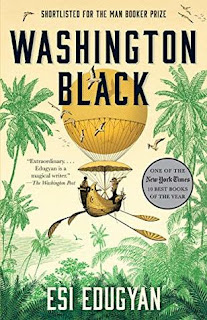 This novel opens on a sugar plantation in Barbados in 1830. Here we meet young George Washington Black, born a slave and destined to spend his life working the fields. Until the master's brother arrives, that is. Titch, as he is known, is trying to build a flying vehicle he calls a cloud-cutter and he requires an assistant to help him and to be used as ballast. Wash seems about the right size, and this chance meeting is to change his life.

Moving from Barbados to the Arctic to Nova Scotia and beyond, nothing that happens could have ever been imagined by the young boy. He learns he is a talented artist and is especially fascinated by sea life. He is pursued by a slave-catcher and he's recognizable because of scarring on his face, so a dark shadow follows him, no matter how far away he goes.

His relationship with Titch remains the focal point of the story though. Wash always wonders why Titch picked him, and long after they are separated he still is not free of him. Without Titch, he'd still be on the plantation, but he doubts that his admiration for the man was reciprocated, and he is tortured by what he sees as their unfinished business. Another significant relationship is with Tanna, a woman he meets while drawing at the seaside and who happens to be the daughter of an author with whom Wash is familiar. She and her father both become integral to his life.

This is the best thing I've read recently. It's a grand adventure to many disparate parts of the world, more than a well-traveled modern person would ever see, and it all begins accidentally for Washington Black. He meets new friends, but never forgets those from the plantation, especially Big Kit, a mother figure with whom he had a close but tempestuous relationship. He thinks about her often as he travels the world.

This is such a different view of the 19th century than I am used to. First of all, it doesn't take place primarily in England or the United States. But also, we see parts of the world I don't usually see in novels set in that era, such as Barbados, Nova Scotia, and even Morocco, and those places all come with vivid descriptions. Wash is black, which of course provides a very different perspective, and his unique situation is just fascinating. Everything felt fresh and unexpected. I haven't read anything like it, and I was completely absorbed.

Washington Black was on many "Best of" lists after it came out, and the honor is well-deserved. If you'd like to read an adventurous historical novel told from an unusual perspective, I highly recommend it.
Posted by 3goodrats at 3:11 PM