All my recent projects are knit in dark colors, so the picture quality isn't great. It's just too cold to go outside for pictures right now.

First is my Marseilles Pullover from the Summer 2006 Interweave Knits (timely AND seasonal!) It's actually not a summer sweater though, it's a long-sleeved pullover in Cascade 220 wool. I began in December, but had a minor setback when, several inches into it, I noticed a mistake a couple of inches back. I considered just leaving it, but ultimately knew it would bother me so I ripped back and fixed it. I'm glad I did! I'm happy with it so far, but it's slow going. 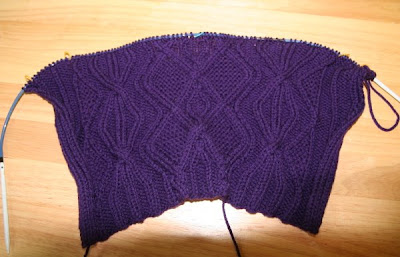 Next is the Pomatomus sock from Knitty.com, which I'm knitting as part of the January Sockdown on Ravelry. I cast on back on New Year's Day and to qualify I must finish the pair by the end of February. I'm certainly on track to do so, and if I fall behind, well, I'm on vacation the last week of February and have no other plans. I've actually made a decent amount of progress since this photo was taken - I just finished the gusset decreases. 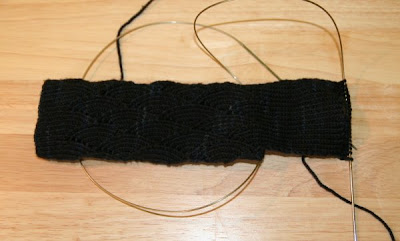 Last but not least is the neckwarmer I'm making from Knitpicks Decadence. Here is the last progress shot I took: 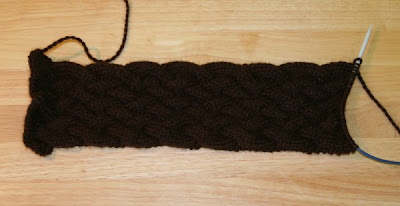 Soon thereafter, I decided that the stitch pattern was inappropriate for such a lovely drapy yarn and resolved to frog it. When I sat down yesterday to rip it out, I instead found myself finishing it. It's blocking right now, which I think will relax it a bit and I'll feel better about the yarn/pattern combination. I didn't use a real pattern for this, just a stitch pattern from a Barbara Walker treasury. When I post the finished project sometime in the next week or so, I'll include my instructions in case anyone else wants to make it.
Posted by 3goodrats at 1:09 PM