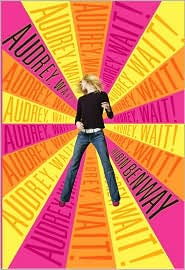 When Audrey ends her relationship with aspiring rock star Evan, he writes a song about their breakup called "Audrey, Wait!" It shoots to the top of the charts, shooting his band to stardom. Unfortunately, it creates a great deal of notoriety for Audrey as well, and she finds herself hunted by fans and paparazzi, making normal life impossible.

I had a couple of minor issues with the book. First, it was poorly edited in spots - there was a repeated sentence in one chapter, and later in the book a minor character's name changed from one paragraph to the next. Second, the entire premise of the book is faulty. A million songs have been written about relationships or breakups, and I can't think of one instance in which the subject of the song has become famous. I know we all dialed 867-5309 over and over back in the 80s, but did any of us really care who Jenny was? Even though it's easier to stalk people nowadays, I don't think this has changed. Although plenty of people become famous for nothing (I'm looking at you, Paris), I just can't see Lindsay Lohan clamoring to play someone's ex-girlfriend in a music video.

Having said that, this book reminded me why I love the young adult genre. You see, those minor issues were totally overshadowed by everything I liked about this book. It was fun and silly and Audrey was totally likeable and didn't take shit from anyone. She had a great side-kick in her friend Victoria, and her budding romance with her ice-cream shop co-worker James was totally cute. I also love the role that music played in her life, and the way that was integrated into the book. Every chapter began with a quote from a song, most of which I've never heard of because unlike Audrey I am completely out of touch with what is popular these days. I'm hoping for a sequel. Two thumbs up!
Posted by 3goodrats at 9:51 AM

I'm not sure if I've mentioned before, but I really love reading your reviews. Thanks for posting them!

You're welcome! I'm glad someone reads them :)