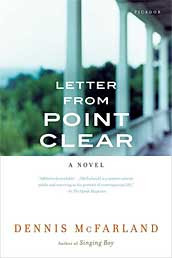 A family is reunited at their childhood home in Alabama after their father's death. Ellen and Morris receive a letter from their sister, Bonnie, who had left New York to help care for their father in his last days. She stayed on to take care of the house and, apparently, to fall in love with and marry a local evangelical preacher named Pastor. Somewhat alarmed by the sudden and surprising marriage, Ellen and Morris decide to travel to Point Clear to visit Bonnie and her new husband. Just before they arrive, Bonnie divulges to Pastor that her brother Morris is gay, and Pastor makes it a mission to try and lead Morris out of his sinful lifestyle. But though there is tension, there's not as much as one would expect. Pastor's attempts are half-hearted at best, and he and Morris actually get along quite well.

My book group found McFarland's writing comparable to Julia Glass, though I have read little Glass, and none recently, so I can't weigh in on that one. Aside from that, they liked the book much less than I did, so perhaps the appeal isn't as universal as I thought. My one quibble with this book is that when all is said and done we still know so little about Bonnie, who is in a sense the focus of the novel. But to me that is more than made up for by the simple pleasure of reading McFarland's writing. I also shouldn't end without mentioning how much I liked the other characters, especially Morris. My favorite part of the book is when the family pulls into a gas station where a sign reads "YOU" ARE OUR BEST CUSTOMER. Morris whispers to Ellen, "Observe the ubiquitous misuse of quote marks; it makes me doubt my very existence." I love anyone who dislikes the misuse of quotation marks as much as I do, even if he is not real. 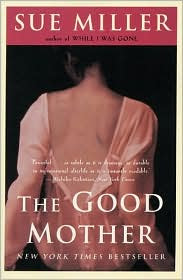 The Good Mother by Sue Miller

A divorced mother has to fight for custody of her 5-year-old daughter after her husband accuses her and her new boyfriend of inappropriate sexual behavior. This sounds like a great premise for a novel, but I honestly had a hard time being sympathetic for Anna's plight. Seriously, if you are in the middle of having sex and your small child comes into the bedroom and climbs into bed with you - stop. I get that Anna and Leo were just laid-back about things like nudity, but to me it is clear when certain lines get crossed. Also, during the period that her daughter stayed with her husband while they awaited trial, I didn't get much of a sense that Anna really missed her.

The writing was a bit clunky too. It jumped back and forth between the present, and a past in which Anna's family spent summers together on the Cape, but the space between these jumps were long enough that I kept forgetting about the scenes in the past so the book didn't feel tied together; it felt more like two different books. The novel also felt dated somehow. I've read other books set in times when people had different attitudes about things (divorced women were looked down upon, for example) and they just felt historic. This one didn't, but I can't pinpoint what exactly about the writing made this novel feel out of date.

I've read two other novels of Miller's (The Senator's Wife and While I was Gone) and enjoyed them a great deal. The Good Mother was her debut novel and I had heard good things about it, but now I think I'll stick with her more recent works.
Posted by 3goodrats at 8:03 AM