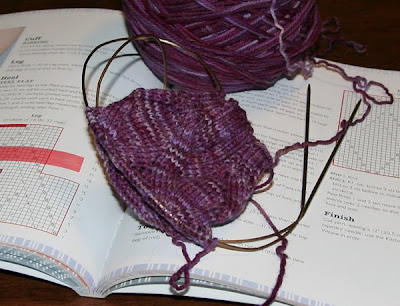 My sock looks almost the same as last time you saw it. But, surprise! I have done lots of work on it since then.

I have not mentioned here the chaos that has been ruling my life for the last month or so, and which has finally ended along with my job. It was impossible to concentrate on anything, hence the tragedy that befell my sock (and the fact that I'm reading the horrid Twilight series rather than something that is actually worth my time, but that is another matter.)

Two weeks ago, mid-crisis, I went to knitting group because...how relaxing! Knitting! With lovely, inspiring people who are also knitting! By about halfway through the evening I was getting close to the heel of my sock and realized that in my recent distraction I hadn't tried it on yet. Even once! So I pulled off my shoe and sock (and that's another thing - why am I still forced to wear socks at this point in the so-called summer?) and with a flourish, brought my sock-in-progress over my toes and proceeded to pull....and tug....and swear....and couldn't get it over my heel.

So I ripped it all out, worked on my Coraline swatch, and looked at some knitting books until it was time to go home. The next day I restarted it on larger needles and have been trying it on about, oh, every ten minutes. Just to make sure.
Posted by 3goodrats at 4:16 PM

initially i thought knitting is just a wastage of time. my mind has changed. it is now a mind soothing activity for myself.