What Happened to Anna K. : a review 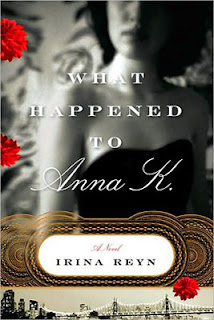 If you know me well, you know that there is a special place in my heart for Tolstoy's novel Anna Karenina. An unhappily married woman, Anna, leaves her husband for another man with whom she has had a child. Her husband refuses to divorce her and her new relationship isn't going as she had hoped. A pariah trapped by her poor life choices, she ultimately throws herself in front of a train. It is huge sweeping novel filled with themes of romance, family, guilt and the restrictions of 19th century Russian society.

Irina Reyn reworks Anna Karenina and delivers it as a fresh yet familiar story, set within a community of immigrant Russian Jews in New York City. The themes are the same, and even some the imagery - instead of trains in the Russian countryside Reyn has given us the New York subway as a motif appearing throughout the book. Rather than the stiff society of 19th century Russia, the modern Bukharan Jewish community provides parallel context, very fitting with its strict rules regarding chastity and tradition. Even the names of the characters are the same, but don't let it fool you - you need not have read Tolstoy's novel to enjoy this book (though I do recommend it!)

What Happened to Anna K. is a wonderful in its own right, the characters complex and the writing a true pleasure to read. Irina Reyn is unmistakably talented - hopefully this, her first novel, won't be her last.
Posted by 3goodrats at 8:10 PM

I'm ashamed to admit that I've never read Anna Karenina. I have to add it to my "to-read" section of Goodreads, pronto.