Try not to faint from the shock. I don't have enough smelling salts for all 6 of you.

Also, don't get too excited about the knitting - it's only a dishcloth. 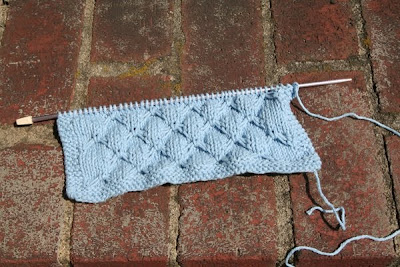 It is smocked though, so that should count for something. You may be asking yourself, what is smocking? Well, it is a fiddly awkward technique I previously used on the hateful Leyburn Socks which I don't think I recognized as smocking at the time. It is a textural pattern created by slipping several stitches in a row, leaving a "float" of yarn in front of the work. On a later row, you put your needle under the float (or in this case, the multiple floats) before putting it in the next stitch, so that it pulls the center of the float upward, making a decorative pattern.

The other day I had just finished a pair of socks (stay tuned for pics!) and immediately wanted to start a project but the only yarn I had available was sock yarn and this cotton. Since I was in the midst of watching episodes of Lost and didn't want anything too complicated I opted for a simple dishcloth. At the rate that I've been knitting, it should be finished right around Halloween.
Posted by 3goodrats at 9:58 PM

Well nothing says Halloween like a beautifully intricate hand knit dishcloth! It is quite pretty!