How to Say Goodbye in Robot : a review

How to Say Goodbye in Robot by Natalie Standiford (2009) 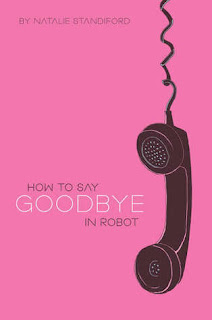 When her family moves to Baltimore, Beatrice is the new kid at a school in which everyone has known each other since kindergarten. She soon befriends the social outcast Jonas, also dubbed Ghost Boy. He introduces Bea to a late-night radio call-in show, Night Lights, and they meet a group of quirky fans of the show while their own friendship deepens. But Jonas has a dark past and troubling home life, which worsens as he uncovers secrets his father has been keeping from him about his family. Bea struggles with her own family problems and difficulty expressing her emotions – dubbing herself Robot Girl - and her friendship with Jonas becomes tumultuous.

I picked up this novel after a number of recommendations, though the cover and jacket summary made it sound like a typical girl-meets-boy teenage romance. It is nothing like that, and I’m afraid my description isn’t much better. It’s hard to explain why this novel appeals so much. Bea’s voice is genuine and likeable, and her social life is believable and realistic. There is enough intrigue in the story to keep the reader’s interest, and it’s easy to see Jonas’s appeal. I kept wondering if the two would become more than friends and the tension created in their semi-attraction kept me invested in the story. Great plot, great cast of characters, great execution!
Posted by 3goodrats at 7:40 AM