The Girl With the Dragon Tattoo : a review


The Girl With the Dragon Tattoo by Stieg Larsson (2005) 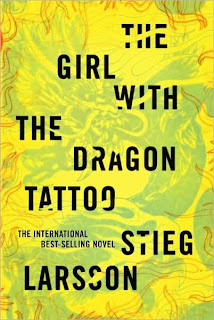 Now and then a book is super hot, coming from out of nowhere to rise to the top of library hold lists. I try not to fall for it. In the past I have read books that didn’t appeal to me just because they were so popular and, indeed, ended up feeling duped. I was torn about the Stieg Larsson trilogy, but heard enough good reviews that I finally took the plunge. (Plus, I’m a sucker for anything Scandinavian.)

Mikael Blomkvist is a journalist who has just been convicted of libel after his magazine printed a story and couldn’t back it up. He is almost immediately contacted by businessman Henrik Vanger, who hires him to investigate the disappearance of his great-niece Harriet Vanger, unsolved for several decades. Lisbeth Salander, a young researcher with a troubled life but excellent hacking skills, is enlisted to help Mikael and together they uncover more than they bargained for.

In the beginning I noticed a few awkwardly worded spots, but that may just be the translation. Before long I got sucked into the story and didn’t want to put it down. The plot was complex enough to make it enthralling, but not confusing. The characters were well developed and fascinating, which added an even greater depth to the story. Even though I had been warned, I was still taken by surprise at some of the more unexpectedly graphic and disturbing scenes. So many things about this book were unexpected and new and fresh that I enjoyed it very much. I just got my copy of the second book in the series, The Girl Who Played With Fire, so stay tuned for my thoughts on that one!
Posted by 3goodrats at 2:07 PM