Or, The Importance of Reading all the Words in the Pattern

The good news is that I almost finished my Procrastination Pullover, with the minor exception of the short sleeves. The bad news is that I screwed up bad enough and early enough that most of it needs to be ripped out.

This is a bottom up raglan, which means that as you approach the chest area, you need to cast on for the sleeves, adding extra stitches to the round, that you will later pick up and knit to finish the sleeves. In this pattern, the instructions read “Slip next 6 stitches on waste yarn, provisionally cast on 42 stitches for the first sleeve, work to 3 stitches before second side market, slip next 6 onto waste yarn, provisionally cast on 42 stitches for the second sleeve, work to end.”

Somehow I missed the very important word “provisionally,” and yes, I realize that it appears there twice so I have no excuse. When I got to those parts I just cast on the 42 stitches using the backwards loop method and continued on. Then I finished the body of the sweater and decided to read ahead to the sleeve instructions, which begin by saying to undo the provisionally cast-on sleeve stitches. Whoopsie. 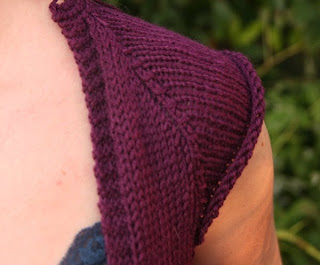 At this point I did what anyone would do and just shoved the whole damn sweater in my basket and started working on my Whisper Cardigan instead, but this problem will eventually need to be faced. Sooner rather than later, given that we are now moving into fall, the season in which I was planning to wear this sweater.

I considered whether I could just pick up the stitches and knit the garter edging, skipping the 3 rows of stockinette (which would make my error quite visible). However, there are some other issues with this sweater that I wouldn’t mind rectifying.

For instance, despite adding a bit to the length, it is still too short. 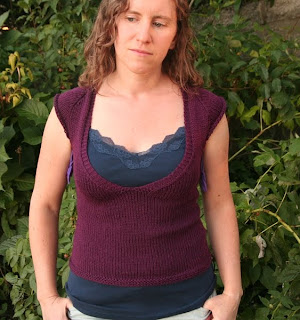 I don’t think I accounted for this much horizontal stretch, which consequently makes it shrink vertically.

Additionally, I didn’t see the part of the instructions describing how to round off the edges of the neckline before finishing it (again with not reading the pattern thoroughly). So ripping back and re-knitting may make a lot of improvements that result in a more wearable garment. I’m trying to be positive about this.

It IS a quick and easy knit and after all I do have a vacation coming up soon. If I have to re-knit a whole damn sweater, surely some of the sting will be taken out of it if I’m doing it in Europe, right?
Posted by 3goodrats at 9:56 PM