The Truth About Forever : a review

The Truth About Forever by Sarah Dessen (2006) 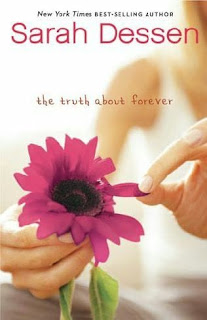 Macy can’t forgive herself for showing up late to run with her father that day. Maybe if she had gone right away instead of sleeping those extra few minutes, she could have arrived in time to prevent his death. Now she is the girl who watched her father die, and is tired of everybody’s pitying looks and words of sympathy. She keeps her feelings inside and does what is expected of her, studying hard, working at a boring job in the library, and trying to be perfect. Her façade begins to crack a bit when her goody-goody boyfriend Jason suggests they take a break. Then she takes a second job at Wish catering. Thriving on the busy chaos and befriending her new co-workers, Macy begins to feel alive for the first time since her father’s death. She becomes close to Wes, opening up with him about her past as he shares stories of his mother’s death and his incarceration. But Macy’s mom, hiding her grief behind long hours of work, doesn’t see things the same way and Macy can’t bring herself to confront her mother about what she is going through.

I started off on the wrong foot with this book. Having a very similar experience as a teenager, I couldn’t buy the idea of Macy being “the girl who saw her dad die.” I absolutely understood the constant ongoing words of sympathy (so fake and polite and requiring some sort of awkward response), but to be labeled like an outcast because she happened to be there when he died? Shaky premise. Jason, her boyfriend, was also a little hard to picture with his bizarre language that was somehow a cross between a therapist and a businessman, but contained zero teenage boy. However, I warmed up to Macy and the book very quickly. I understood the torture of her boring job where she wasn’t actually allowed to do anything interesting, and found the characters vibrant and genuine.

Macy’s trajectory of grief was believable, as was her strained relationship with her mother and their inability to discuss her deceased father. I loved the details about her dad’s addiction to ordering products advertised on tv. Wes was also great, an artist with a somewhat dark past. Their game of Truth reminded me of so many conversations I had with friends as a teenager, and I rooted for them to finally make a romantic connection. Don’t let the stupid cover deter you – this is a satisfying novel that has nothing to do with feminine hygiene products.
Posted by 3goodrats at 9:45 AM