It's Not Summer Without You : a review 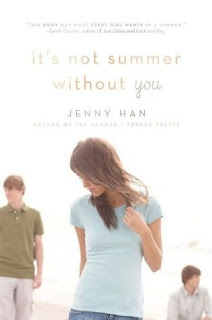 In this follow-up to The Summer I Turned Pretty, we skip ahead to the following summer. Much has happened in between – Belly had a disastrous relationship with Conrad, culminating in a prom night break-up, and Susannah has died of cancer. A couple of months later Jeremiah calls Belly in a panic because Conrad has gone missing from summer school. All three end up at the summer house in Cousins in a desperate attempt to right everything that has gone horribly terribly wrong.

There are a lot of flashbacks to the things that have happened, like Susannah’s funeral and Belly’s quasi-relationship with Conrad, but the focus here is on the future. All the characters are hurting because of Susannah’s death, and the relationships are all strained because of it. I thought Han did a good job of this actually. Sequels are tough, and this one surely couldn’t be anything like the first simply because of what has happened, and she deftly handled the developments and aftermath.

It’s not a happily ever after and she leaves some question marks at the end. I think her point – at least this is what I take from it – is that it doesn’t matter because nothing really, truly ends. Our lives are changing all the time, and regardless of who Belly ends up in a relationship with at the end of the book, she hasn’t “ended up” at all because she’s only 16. Many more things will happen to her and there is no way to predict them this early. (No Harry Potter/Hunger Games epilogues here!)

If you really just want a feel-good summer novel, maybe just stick to the first book. But for further insight and character development (or if, like me, you always need to know what happens next) I do recommend reading this book as well. Let me know what you think of it!
Posted by 3goodrats at 2:35 PM

Labels: books, it's not summer without you, jenny han, reviews, summer i turned pretty, YA