In This Light: New and Selected Stories by Melanie Rae Thon (2011) 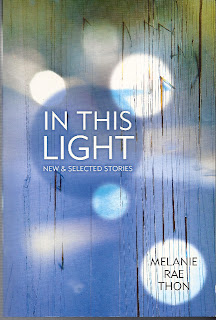 In This Light has been on my to-read list since my friend Kevin reviewed it for the Boston Globe almost two years ago. Most of the nine stories included were published in her earlier works, but they were all new to me and fit together quite well, thematically as well as stylistically.

Thon's characters are poor, troubled, grief-stricken, guilty, and desperate and we are visiting the darkest parts of their souls in their worst moments. Each story is exquisitely crafted with startling, vivid images, and each one was as emotionally powerful as the last. In "Punishment" a slave is hanged for the death of her master's son, and the story contains some of the most haunting scenes in the book.  In "Father, Lover, Deadman, Dreamer" the narrator reveals that she hit and killed a Native American man, and her father helps cover up the crime. I think one of the most vivid images in the whole book was young Dora lying inside an abandoned refrigerator in a field in "Necessary Angels."

The author employs some narration styles that are difficult and complicated but which she pulls off expertly. The voices bob and weave, take unexpected turns, a third person narrative suddenly talking directly to you in a way most unnerving. She even handles second person narration deftly, a style which usually comes off either awkward or pompous. Thon is both extremely talented and completely unpretentious.

I read this slowly over the course of a month. I'd only pick it up if I had time to read a full story, and never read more than one in a sitting. I don't think I could handle more than one of these stories at a time, they are so emotionally wrenching. When I finished I considered going back and reading some of them again because I felt like I'd get more out of them upon a second reading, and they certainly deserve it. Instead I took it right back to the library and put it on my Staff Picks display in the hope that some library patron would happen upon it. I'm surprised this writer isn't more well known, but I'll certainly be recommending her.
Posted by 3goodrats at 9:53 AM