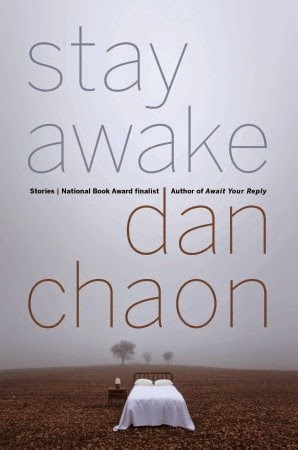 Have you ever read a really good book and several days later when you try to tell someone about it, you can't even remember what it was about? That's how I feel about Dan Chaon's book of short stories, Stay Awake. Granted, collections are a little tougher anyhow because there are so many different plots and characters, but all that has really stuck with me are the feelings they evoked.

Some bits and pieces I remember: a guy who is haunted by his former family who he wronged, and whose new young son is having terrible nightmares; a couple whose newborn has an extra head; a guy who keeps finding mysterious notes everywhere that seem to be trying to tell him something; children murdered by their parents. Two of the stories feature men who each lost a finger by falling off a ladder.

They aren't horror exactly, but they are dark and unsettling. There's always a feeling that something is not quite right and you can't see what it is, but it's just out of the corner of your eye and you'll know the full, terrible truth in just a moment. They are all completely unnerving.

Chaon's writing is vivid and precise, and he neatly conveys all of the most unpleasant feelings that exist in humanity in one convenient volume. As with all great short stories, a lot is conveyed in few pages, and in these stories whole lifetimes of guilt and fear can be read in a half hour. At first, I read one story every day or so. But then I read the last four in a day, and that was a bit too much weirdness and discomfort to be enjoyable. So, pace yourself.

Am I exaggerating? You be the judge. After all, October is the perfect time to delve into the strange and creepy. You might not enjoy these stories exactly, but you won't soon forget them.
Posted by 3goodrats at 9:25 PM

"Have you ever read a really good book and several days later when you try to tell someone about it, you can't even remember what it was about?"

Yes! I've had that happen a few times - most recently with The Book of Illusions by Paul Auster. I'm intrigued by how something dark and unsettling can be forgettable, but since its nearly Halloween I might give it a try!

Well, it's definitely just the details I'm forgetting, not the general atmosphere of creepiness.