The Heir (The Selection #4) by Kiera Cass, narrated by Brittany Pressley 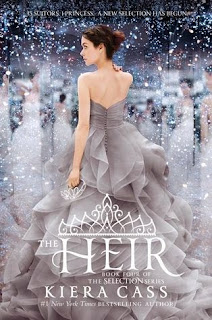 Twenty years after the events of the last Selection book, the castes have been abolished, but unrest remains. America and Maxon need something to raise morale, and decide it's time for another Selection. This time, it's their daughter, Eadlyn, who will be selecting a mate. Eadlyn is not at all happy about this idea, but finally resigns herself to it (with some important conditions) as just one more thing she is required to do as the future Queen. Soon, the palace is filled with eligible young men trying to win her hand, but Eadlyn is determined to retain her independence and freedom.

What I found most interesting about this is that the tables have turned gender-wise, and we're also getting the story from the view of the person doing the selecting. You know how everyone treats female political candidates differently from male candidates? Well, here, Eadlyn has to be incredibly careful about how she is seen by the public. Showing strength can be a double-edge sword, though I'll admit her behavior isn't always ideal. But I do wish it had highlighted the gender differences a bit more, because even in Ilya, it makes a difference.

However, Eadlyn is certainly not perfect. She pushes everyone away, like the boys who are trying to get to know her. She didn't want the Selection to happen in the first place and it takes a long time for her to be willing to get to know any of the boys. Plus, she sometimes acts impulsively without considering the consequences. She's a teenaged girl though, so I suppose it's to be expected. It's also clear that her parents have protected her from the realities of the outside world and sometimes this is to her detriment. Eadlyn is fairly uppity and spoiled. But, so was Maxon in the first book of the series. Perhaps that just comes with being royalty.

I think I was about halfway through the book when I learned there's going to be another one. For some reason, I was under the impression that this one was a stand-alone (or the final book in the series, depending on how you look at it.) At any rate, it didn't end where I thought it would, though there was a pretty big event that happened right at the end (as I've come to expect from these books) so now I'm sort of left hanging. For probably a year, until the next book comes out.

This series has been enjoyable all the way through and I was just as happy with this installment. I completely credit Kiera Cass (and narrators Amy Rubinate and Brittany Pressley) for my newfound ability to run two miles on a treadmill without stopping. Running is seriously boring, but these audiobooks suck me in so much I don't want to stop.
Posted by 3goodrats at 8:00 AM