A Bollywood Affair by Sonali Dev (2014), narrated by Priya Ayyar 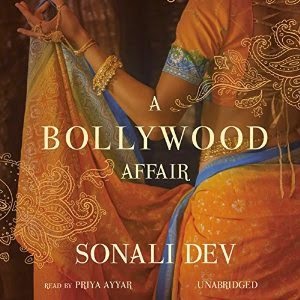 Married at the age of four, Mili has grown up waiting for the day her husband would come for her. In preparation to be a good modern wife, her grandmother has allowed her to leave India to study in America. Meanwhile, her "husband" Virat has been under the impression their marriage was annulled and he has a new wife and they're expecting a baby. But he learns the childhood marriage was not annulled and needs to get a divorce so his child won't be illegitimate. Then a plane crash almost kills him, and he must send his brother Samir - a famous Bollywood director - to America with the divorce papers and get Mili to sign. When Samir arrives in Michigan, he assumes it will be quick trip, but before he knows it he's completely wrapped up in Mili's life in a way he did not expect.

There is a lot going on in this book when I stop and think about it. That summary is just the premise, and doesn't even touch on Mili's roommate's elopement, or Samir's family history, both of which are pretty major sub-plots to the romance between Samir and Mili. Did I mention this is a romance novel? It is, but it's also rather more.

I have pretty mixed feelings about this book, though I mostly liked it. The whole plot hinges on Samir lying about who he was when he first arrives at Mili's apartment, and I honestly don't understand what made him do that, but it was easy for me to overlook this since the rest of the book wouldn't have happened if he had just introduced himself as Virat's brother and asked her to sign the divorce papers. But I have other problems with the novel that are more serious and I'm going to get those out of the way before I talk about what I liked:

1 - There's a whole lot of jumping to conclusions, and at least one situation in which Mili refuses to let Samir explain himself in a situation where, if I were her, I would have demanded an explanation.

2 - The virgin/playboy trope is irritating even in historical fiction when it's understandable, worse in contemporary romance, but ridiculously over-the-top in this book. Samir is infinitely more experienced than Mili, but despite having sex with many women, he never understood true love until he entered her magical untouched pure-as-snow vagina. It is, of course, after having sex that Mili learns the truth of Samir's visit and feels incredibly betrayed. This is understandable, but she then goes into a ridiculous monologue about how he has sullied her, and she feels sexually used in a way that reflects just as badly on her as on him. She actually says "I was pure...now I'm a sinner, a slut." The misogyny was mind-boggling.

3 - Possibly the most serious offense is that Samir refers to his penis as "little Sam," which almost caused me to put the book down. Penis-naming is unforgivable.

Some of these things are just frustrating because I might expect them in a sub-par book, but not in a good book. So let's talk about what I liked!

A Bollywood Affair is another culturally interesting book that involves forced marriage. I was listening to this audiobook at the same time I was reading Written in the Stars, which is just a weird coincidence, but it had some of the same appeal factors. Mili was only in the US temporarily and, although much of the story took place here, she is Indian and her culture is a big part of who she is.

Despite how naive she seemed, Mili was pretty scrappy. She was struggling to get by, and in addition to her course load she had two jobs, one of which was washing dishes at a restaurant. She lived with a roommate in a crappy apartment and could barely afford her half of the rent. Oh, and her parents were dead. I can actually kind of understand her unwillingness to give up on the idea of this marriage - even though she hadn't seen her husband since their childhood ceremony - because she had so little else going for her. And obviously she had grown up with her grandmother constantly reminding her about it like it was the most important thing in her life.

I also loved that Mili is a girl who likes to eat. Samir can cook, and he prepares many delicious meals for her, which is my idea of the perfect relationship. Plus, the descriptions of the food and the way Mili ecstatically consumed it made me so hungry for Indian food!

For a romance novel, there's a lot of family and I think this addition added to the richness of the story. The family conversations are rife with humor, and I especially enjoy the relationship between Samir and his brother, but bringing in family members also meant that through them we get another perspective on Samir's personality.

The romance itself was kind of a slow burn, beginning in friendship and building up until Samir and Mili could no longer deny their attraction. The complications - required, because it's a romance novel - were numerous and often forced (see complaints 1 and 2 above) so that was a little frustrating. But I found myself rooting for this couple all the same, because I liked them both and they deserved to be happy.

The audio narration was not fantastic in that it sounded a bit too much like someone just reading a book to me. But Priya Ayyar has a pleasant voice to listen to and slipped effortlessly between American-sounding and accented speech, which is crucial for this book.

All in all, I think I'd give this a B- if I were grading it that way. I believe this was a debut, so I think that although it's a little rough around the edges in some ways, Sonali Dev is a promising author. Her story was fresh and new, partly because of the cultural elements, but also because she knows how to create a compelling story. I'm looking forward to reviews of her upcoming novel, The Bollywood Bride.
Posted by 3goodrats at 7:42 AM