The Amazing Maurice and His Educated Rodents 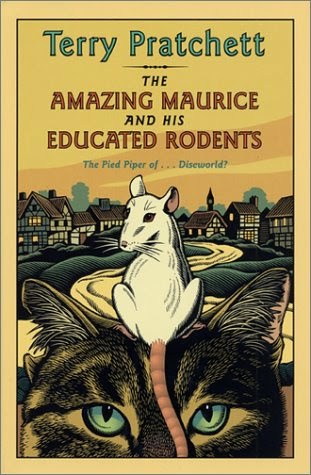 A cat, some rats, and a "stupid-looking boy" named Keith have a great money-making scheme. They go to unsuspecting villages where Keith plays the part of a pied piper, offering to lead their rats away. The rats he leads away, of course, are his allies. Keith shares his pay with them, and they move on to the next village. Maurice, who came up with this idea, is no ordinary cat, and these are no ordinary rats. They can talk and read and do all sorts of things regular animals can't do, and they've been profiting quite well so far. But when they arrive at the town of Bad Blintz, they find there's already something shady going on with the town's rat problem.

I have not read any of the other Discworld books, so I can't speak to how this compares, or how it fits into the world Pratchett created, but I found a lot that appealed to me. I love rats (see name of blog) and of course cats, so it had that going for it to start with. Pratchett's style is rather light-hearted and the story was fun to read, quite entertaining, and poignant in parts.

The rats all have names they got from product labels, like Dangerous Beans, Big Savings, Hamnpork, and Peaches. Everywhere they go, they drag with them a book called Mr. Bunnsy Has an Adventure, which is quoted at the beginning of every chapter, and which they grasp onto because it makes them feel less alone as talking animals. Maurice is rather sly, and not completely trustworthy, but he's smart and he works pretty well with the rats.

It's not all fun and lightheartedness though. There's a pretty dark underbelly to this new village they've arrived at, and the story contains some pretty horrifying imagery. There are crowded cages of rats who are treated horribly, and also a rat king, which is something I have a hard time believing could exist, but apparently does. Still, the personalities of the characters, and Pratchett's engaging and witty style counterbalance these aspects so the story doesn't get too dark overall.

I read this for my Not-So-Young Adult book group, who chose it just after Terry Pratchett's death. It's a great change of pace after reading three downers in a row! I'm not sure whether or not I'll try more of Pratchett's books in the future (do any of the others have talking rats?) but I greatly enjoyed the time I spent with this one.
Posted by 3goodrats at 7:36 AM