An Astronaut's Guide to Life on Earth

An Astronaut's Guide to Life on Earth by Chris Hadfield (2013) 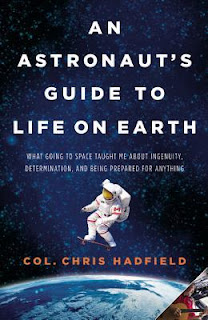 You may have heard of astronaut Chris Hadfield from his YouTube videos, such as his popular performance of Space Oddity which he recorded aboard the International Space Station. Hadfield has written a book about his experiences as an astronaut and the life lessons he has learned along the way.

As a child in Canada, he watched Neil Armstrong take those first historic steps on the moon and knew that he too wanted to be an astronaut one day. Canada didn't even have a space program and at the time it was impossible for a Canadian to go into space. But, Hadfield reasoned, only recently it had also been impossible to walk on the moon. So there we have lesson number one: just because something is impossible doesn't mean it will always be impossible.

Hadfield didn't know if his dreams would ever come true, but he did everything he could to prepare himself nonetheless. Throughout his career he has shown the same incredible patience and perseverance, and I was in awe as I read about it. He is very sensible and logical and determined, but also displays a healthy sense of humor (which I am convinced is key to being successful as a human being.) I was also envious of his ability to concentrate and maintain focus. Once he was flying a jet in formation, and discovered a bee in his helmet. He had no choice but to ignore it, which is completely reasonable, but had I been in this situation I would surely have panicked and gotten myself (and possibly others) killed.

His anecdote about ignoring the bee was meant to illustrate a piece of wisdom he came back to a couple of times. Basically, don't worry about what you can't control. Focus on what you can do and ignore the rest. Ignore the bees, and don't take jerks personally. Complaining about things you can't control doesn't help either. He cautions against getting carried away with group griping. It does help bonding, but if you let it go on it only makes the problem you're complaining about seem even bigger than it is and certainly doesn't solve it.

I learned a lot about space travel; there's just so much that had never occurred to me. As you would expect, a lot of preparation goes into preparing for launch but I didn't realize the extent of it. Because of everything that goes into preparing for launch far away from home, NASA provides family escorts: astronauts who aren't currently training for a mission who sort of act as a surrogate spouse/concierge for the family. That escort runs out for sandwiches, deals with hotel issues, and carts the family around, but also has to be there if someone in the family dies while the family's astronaut is away or, worst-case scenario, if the astronaut dies during the mission. In that the case, the escort will help with the funeral and long afterward, advocating for the family and assisting with things like setting up an education fund for the kids. Hadfield has done this for other families as well, and it helped him to see what a launch was like for the families and also helped him to understand that his family's struggles were just like those of other astronauts' families.

Over and over Hadfield would ask himself "What is the next thing that could kill me?" and then prepare for that. An astronaut needs to be the very best that he or she can possibly be so it's no surprise that this is kind of a self-improvement manual. It's a great complement to Mary Roach's Packing for Mars, which is the first book I read about life in space. Hadfield's book touches a bit on some of the same practicalities, but is really more focused on becoming an astronaut, what it's like in a larger sense, and of course the lessons he's learned that can apply to all of our lives.

I listened to the audio version, which was read by Hadfield himself, complete with charming Canadian accent. But when I grabbed a copy of the paper version to peruse in preparation for writing this post, I saw that it includes photos. They're not integral to the experience of the book, but if you're going to listen to the audio - which I definitely think is worthwhile - you might just want to be aware that photos are available. There aren't a ton either; you could easily peruse them in just a few minutes in a bookstore if needed.

However you choose to read it, I think everyone can get something out of this book. Have you read it? Or have you read another book about space travel that you would recommend?
Posted by 3goodrats at 6:22 PM