Packing for Mars: the Curious Science of Life in the Void by Mary Roach (2010) 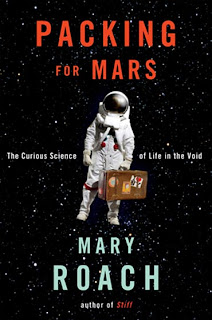 When you think about astronauts and going to space, are you the sort of person who thinks about the science and technology and amazing discoveries, or the person who wonders how the hell they use the bathroom in zero gravity? If, like me, you're the latter type, you're in luck because Mary Roach has written a book that answers that and many other questions about life in space.

In Packing for Mars, Roach investigates many practicalities including eating, throwing up, sex, and hygiene. She also explores topics such as gravity, isolation and confinement, how astronauts are chosen, planning space missions, and the history of animals in space.

I've never been interested in space travel. Not because I find it boring or anything like that, but because I find everything about it absolutely terrifying. But recently the hosts of The Readers podcast interviewed Mary Roach about her book and these more day-to-day and comparatively non-terrifying aspects of space flight. The interview was pretty hilarious and it was clear that this book is not only funny, but totally accessible for non-sciency types (and also not scary).

There IS science, but just enough to understand the basics of things like gravity, which is definitely good to know about. (I even learned that my alma matar has an anti-gravity stone which I somehow missed during my four years of college.) Roach doesn't get bogged down in detailed explanations, instead giving just enough background to understand the concepts and mostly sticking to anecdotes from her interviews or from history. She keeps it light and funny and interesting.

My only -and minor- quibble with the book is the near-constant* use of footnotes. They contained some of the funniest information in the book**, but seriously interrupted the flow.*** It became very distracting.****

Mary Roach has also written books about cadavers (Stiff), the afterlife (Spook), and sex (Bonk) and is immensely popular. Now I understand why, and will likely read at least one of those books as well. Space travel is ever so slightly less terrifying now that I understand it more. Upon finishing the book I immediately watched Apollo 13 and 2001: A Space Odyssey. If you haven't read anything of hers yet - even if you find nonfiction as difficult to get into as I do - you should definitely give one of her books a try.


*Seriously, on almost every page.
**So I don't think those bits should have been omitted, just worked into the regular part of the text.
***Especially since some of them were so long that by the time I finished reading them, I had lost the flow of the main part of the text and had to re-read the last sentence.
****See?
Posted by 3goodrats at 10:00 AM