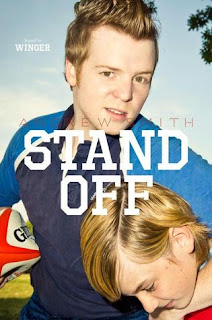 Last year I read Winger, and had no idea it was first in a series until after I finished it. It was a relief to find out there would be a sequel, because I really needed to work through what happened at the end and so did Ryan Dean. In Stand-Off he's back at Pine Mountain and is stuck in a tiny room with a freshman roommate who is twelve years old. What kind of crap deal is this for a senior year? His roommate is Sam Abernathy who, like Ryan Dean, started high school early and is younger than anyone else there. Ryan Dean has no time for this pipsqueak though, because he's busy with rugby and his girlfriend, Annie. He's also haunted by a new cartoon character he keeps drawing, who he calls Nate (Next Accidental Terrible Experience,) and he's been having night terrors.

My very favorite part of this book is Ryan Dean's relationship with Sam Abernathy, who he mainly refers to as The Abernathy and describes as being "cute as a laundry hamper filled with beagle puppies and cotton balls." Ryan Deal finds him completely exasperating. Sam is terribly claustrophobic, which means that he has to have either their door or the window open at all times, resulting in many cold winter nights. He also can't close the door in the bathroom, so Ryan Dean has to leave every time Sam has to use the bathroom or shower. At the same time, this kid is like somebody's mother: he picks up Ryan Dean's dirty clothes from the floor, and even does his laundry. His favorite pastime is eating microwave popcorn while watching the cooking channel. He desperately wants to be Ryan Dean's friend and is completely undaunted by the constant rebuffs.

Although that is a big part of the book, it's more about Ryan Dean coming to terms with his friend Joey's death the previous year. Coming back to school is hard when Joey's not on the rugby team or in the dorms or anywhere, and Ryan Dean feels like he doesn't have friends anymore. He does, of course, but he still isolates himself, even to some extent from Annie. This kid is not doing well. He can't sleep, he's not really eating, and he's being sort of a jerk to everyone. But I know he'll pull through because he has before, and at heart he's a good guy and I think a strong and smart person.

Even though the main theme is pretty serious, it was full of lots of fun everyday stuff in addition to his aforementioned roommate. For instance, his health teacher used a cartoon to teach the boys how to do testicular self-exams (or TSEs) and then assigned them homework to do a TSE and then write a paragraph about it. This same health teacher taught them a framework for sexual consent which Ryan Dean learned very thoroughly and regularly brings up in a joking way, but which at one point causes him to have an epiphany: "Consent applies in every direction, not just between straight guys and the girls they pursue." (Very good, Ryan Dean. You get a cookie!)

I loved visiting Ryan Dean again, and didn't even realize how much I had missed all his quirks, like the way he curses but then admits that he didn't actually say that because he doesn't curse. Or how he'd rate things, like: "That confession was definitely five out of five rogue asteroids on the Ryan Dean West Things I Never Saw Coming Scale." There's nothing more satisfying than a sequel that's just as good as the first book. I don't know if Andrew Smith plans to write more books in the Winger series, but if he does I'll be first in line to read them.

I received my copy courtesy of the publisher via Edelweiss. I was not compensated for this review.
Posted by 3goodrats at 7:50 AM