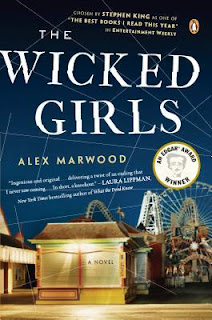 When they were eleven years old, Bel and Jade met by chance and became friends for just one day. By the end of the day they had killed a little girl and after their trial never saw each other again. Twenty-five years later both women, now under assumed identities, are peripherally involved in a series of murders in the seaside town of Whitmouth, England. Amber Gordon is a cleaner at an amusement park called Funnland where she discovers one of the bodies. Kirsty Lindsay is a reporter who comes to town to investigate the murders. Now that they've crossed paths again in a situation with so much attention turned towards them, the new lives they've built are suddenly threatened to come crashing down.

I honestly can't remember where or how I first heard of this book, but when someone in my book group suggested it, I knew I had heard that it was good so I jumped at the chance to read it. I wasn't disappointed.

There's something especially horrifying about children committing murder and I was rather fascinated by this premise. It's not that I can't conceive of children being cruel or violent; I can. It's more the idea that they now have to go through the rest of their lives with such a thing weighing on them. As proven by Amber and Kirsty, it's not easy. They've both grown into adults who are just like everyone else: they each want a good job, a relationship, a nice vacation now and then. But neither can go a day without thinking of the little girl who is dead because of them, or wipe away the visceral images of that day that still continue to haunt them.

Their lives are both fleshed out quite well, though they are very different. Amber lives with her common-law husband, Vic, who seems like a jerk from the very beginning, and two tiny dogs named Mary-Kate and Ashley (a particularly pleasing touch.) She is friendly with some of her co-workers, including a woman named Jackie who is being stalked by a guy she dated briefly. Amber doesn't have a bad life, all things considered, but she works cleaning an amusement park and she's not paid well for it and her husband leaves a lot to be desired. Kirsty, on the other hand, has an incredibly supportive (though unemployed) husband, two children, and a satisfying job. She is the sort of person who drinks lattes and eats bruschetta. Compared to Amber, she is quite posh. (By the way, this book is British so I feel compelled to use their language.)

Another person we get a close look at is the creepy man who is stalking Jackie, Martin Bagshawe. He is clearly lacking in social skills and doesn't understand how to relate to people, especially women; he will get obsessed with a woman in a way that involves both lust and anger and it is very unpleasant to witness. Still, I have to give props to Marwood for this well-drawn, though uncomfortable character.

If I had to find a criticism, it would be that there are a lot of murderers in this book. That is pretty much all I can think of, and even that doesn't actually bother me. I thought this was a great story with characters that felt genuine, and it was told with a level of detail that made it all very easy to picture without getting too bogged down in descriptions. I highly recommend it if you like character-driven fiction that's a bit on the dark side.
Posted by 3goodrats at 8:00 AM