I wrote about the first two volumes of Saga here, and now I've finished all that have been published so far. These three volumes continue the story of Marko, Alana, and their daughter Hazel as they travel to a strange lighthouse seeking a literary hero, after which Alana gets a job in the entertainment industry, and their family is torn asunder. Bounty hunters are still after them, but now they are joined by a robot seeking revenge and a whole slew of other interesting characters.

As much as I love these while I'm reading them, they don't stick with me terribly well so I wish I had them all at once and read them in a row. By the time I picked up Volume 3 I had forgotten what came previously, so I grabbed Volume 2 to refresh my memory. Which turned into a complete re-read of Volume 2 because these books are that good. And then I just plowed through the rest.

It's hard to separate what happened in which volume, but baby Hazel became a toddler, and Marko and Alana began having relationship troubles. After escaping a particularly hairy situation, they decided to sort of hide out in the open, and Alana took a job on a show called the Open Circuit.  The entertainment industry is stressful in many ways though, and soon she started making some poor choices involving drugs.

There is a seemingly endless parade of strange and interesting characters, though my favorite has to be Lying Cat. Sidekick of bounty hunter The Will, the cat knows when someone isn't telling the truth and will just interject "Lying" into the conversation. The Will is good at what he does, but is surprisingly human at times. I also have enjoyed The Stalk, a bounty hunter who is part woman, part spider and is totally creepy looking with her many legs and eyes, but is also totally badass.

This series is about war, but the human side of war. The characters are all very well crafted, and even the minor ones have some back story, and we get a taste of how the war affects people individually. They are all of different alien races, but it is easy to sympathize with their outrage at family members being killed and their desire, in some cases, to get revenge. Or justice, depending on how you look at it.

Sometimes I just stop and look at the art. When I first picked these up I wasn't especially drawn to the illustrations, but as I really started reading it I realized just how expressive it is and I really appreciate some of the more unusual angles and perspectives. The visual experience is just as enjoyable as the story itself.

One of the squares on Winter Bingo is "blue cover" and Volume 5 totally qualifies, so here is my updated bingo card. 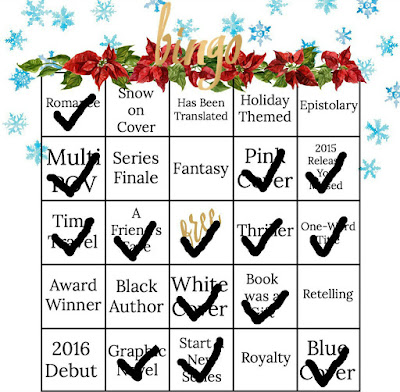